Seoul offers plenty of choices for those who have just moved into the city and are looking to fill their nests with furniture.

But among many of the so-called specialty shop streets, where similar businesses are clustered, Sadang “Furniture Street” in southern Seoul stands out as a destination for those looking for affordable new and used furniture.

The history of Sadang Furniture Street dates back to the 1970s when southern Seoul, formerly dotted with rice paddies, became the capital city’s biggest boom area.

Hundreds of new apartment complexes and big townhouses have since been built there along with posh office buildings.

Also, the city’s main express bus terminal was relocated in the 1980s from northern Seoul to Banpo in southern Seoul - only a few subway stops away from Sadang.

“A lot of people have moved into Gangnam [southern Seoul] since then, and they needed new furniture to fill their new homes,” said Ahn Young-un, the owner of Jangin Furniture, a household furniture retailer on the street. Also, Sadang neighbors Banpo and Bangbae, two of the hottest real estate areas in Seoul. The geographical perch prompted the street to grow from 10 furniture retailers 30 years ago to some 130 furniture shops today, all within about 2 kilometers (1.24 miles) of the main road called Dongjakdaero.

“We are best known to provide the most affordable prices and as the best place for bargain shoppers, with easy access,” said a furniture shop owner who declined to be named. “If you can’t find furniture you want within your budget here, you probably won’t find it anywhere else.”

According to area retailers, new leather sofas for newlyweds cost about 1.2 to 1.3 million won, kitchen tables for four from 600,000 to 700,000 won, and a twin bed from 700,000 to 800,000 won. But the prices are generally negotiable, especially for used items from businesses that have shut down. Young students from nearby campuses, including Seoul National University and Soongsil University, may also get good prices under the condition that the items are not delivered, a free basic service provided for all buyers here.

Also, the shops here receive a steady stream of expatriates living in nearby areas, for instance Japanese housewives living in Ichon-dong, French families in Seorae Village and other foreign residents in Hannam-dong and Itaewon. 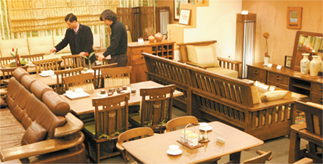 Customers examine a kitchen table and chairs displayed in a store at Sadang Furniture Street on Friday. By Oh Sang-min

“Japanese tend to be more generous, while Germans are very, very frugal, and even try to find places with cheaper prices than we offer,” said Ahn, also the president of the Sadang area furniture retailers’ association. “Americans also tend to be very bargain-conscious.”

As the number of foreign customers walking into their shops still remains relatively low, English and other foreign languages are not usually spoken in these stores. But that does not mean customers from overseas cannot shop here.

“Buying furniture does not require a lot of complicated words. You tell them what wood it is made from, how much it costs, and they touch the furniture to feel the texture,” said Ahn. Indeed, many of his international customers, including even those from Turkey and Jordan, liked his furniture pieces so much that they had them delivered all the way to their home countries despite the added cost.

The street remained vital even during the 1997?98 Asian financial crisis, but the latest economic woes sweeping the world have not left the area untouched.

Ahn, who sees about 200 to 300 customers on Saturday or Sunday and 50 to 60 on weekdays, said the number has been dropping recently as many plans for new apartments have come to a grinding halt. 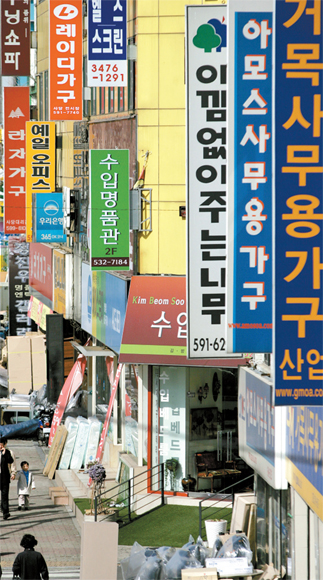 “People usually buy new furniture when they move into a new apartment, so this business is deeply related to the housing construction industry,” said Ahn, who has been running the business for the past 18 years.

“Newlyweds are also big clients of ours, but the young couples tend to be more price-conscious than older married couples who want to buy pieces with more luxurious upholstery when moving to a bigger apartment.”

Spring and fall, traditionally the best seasons for housemoving and weddings, means a boom for furniture retailers like Ahn, who says he has witnessed quite a bit of family drama at his stores. He has seen a bride breaking into tears, prospective parents-in-law quarreling over furniture prices, newlyweds arguing over which bed to choose and swearing to break up, a generous husband who kept smiling while he said, “Yes, honey,” no matter how expensive the furniture his wife set her eyes on.

“One day, a haughty old lady came with her future daughter-in-law and chose a rather gaudy, super-expensive item that would better suit a middle-aged couple than newlyweds,” said Ahn. “She didn’t seem to bother to listen to the bride’s opinion much. You should have seen the poor bride’s face. She looked like she was about to cry any minute.” 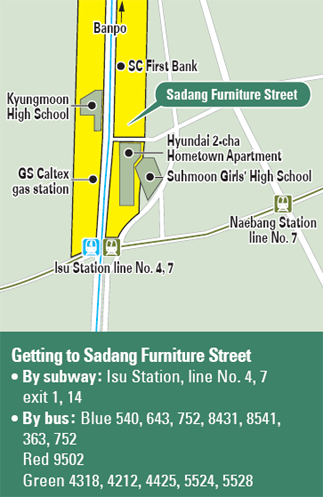 It is common knowledge here in Korea, one of the world’s most wired countries, that retailers of any kind face the daunting task of competing against online competitors offering cheaper prices. And many retailers admit that they face challenges ahead to expand their own presence on the Internet. But furniture still remains one of a few items that require “a hand’s touch” before buying, said Ahn.

“People seem still to be afraid of buying furniture without actually seeing and touching it,” he said.

“Come down here and see, smell and touch the wood before you buy furniture.”


Glimpse of Business in Seoul