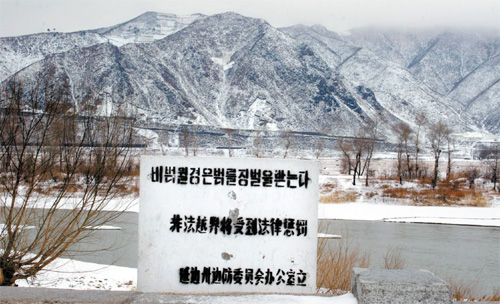 A sign warning against illegal border crossing was set up near the Tumen River where two female American reporters were reportedly arrested by North Korean soldiers on March 17. [YONHAP]

South Korea has collected intelligence on how two American journalists were recently captured in North Korea and has briefed United States intelligence officials on the details, the JoongAng Ilbo has learned.

A South Korean source said that after the capture, U.S. intelligence officials asked South Korea for cooperation in gathering facts about the detention of Korean-American Euna Lee and Chinese-American Laura Ling, who work for Current TV. The United States tried to no avail to negotiate with the North before the incident leaked to the media. The source said the American government had very little information on the status of the two journalists and on the North’s follow-up actions. Other than contacting the Swedish Embassy in Pyongyang for communication, the U.S. took little action. Washington has no formal diplomatic ties with North Korea.

According to South Korean intelligence, Lee and Ling walked across the Tumen River, bordering China and North Korea, at 3 a.m. last Tuesday. The narrow river is a frequent escape route for refugees and the journalists wanted a closer look at North Korea.

Sources said the journalists first wanted to stay on the Chinese side, but then their journalistic urge for a scoop led them to chance a border crossing. As their Chinese guide lingered slightly behind, Lee and Ling were stopped by a North Korean soldier.

According to the sources, the North Korean soldier at first assumed the journalists were Koreans. But their passports and other ID cards revealed them to be American citizens. The capture of the Americans was immediately reported to the North’s Defense Security Command and to the Ninth Army Corps, which is in charge of North Hamgyong Province, where the Tumen River flows.

After being questioned at the security command, Lee and Ling were reportedly taken to Pyongyang last Wednesday. Each was put in a separate vehicle so that there would be no communication between them. According to South Korean sources, the journalists are being questioned at closed-off quarters under the auspices of the command near Pyongyang. One source said, “Our intelligence tells us that since this involved border security, the command wants to physically detain the journalists.” Another source said there is also a distinct possibility that once the current round of questioning is complete, the journalists will be handed over to the National Security Defense Agency, the North’s top intelligence unit.

The sources said U.S. officials were appreciative of South Korea’s quick effort and specific information. They also said Korea told the U.S. that the North is likely trying to get the journalists to admit to espionage at the border. According to the sources, given the North’s relentless style of questioning and investigation, Lee and Ling will have little choice but to reveal what they saw and heard.

When their capture first became known, the journalists were said to be on a trip to report on the plight of North Korean refugees, and their reports on the refugees or footage of North Korean territory could work against them.

The South Korean intelligence community believes the charges against the journalists will likely be espionage because they crossed the border. It’s a felony that could result in a minimum of 20 years in prison in North Korea.

One source said, “The North will film all of its questioning of the journalists and will prepare for negotiations with the United States.”

The source said the North could get the Americans to say they had spied on tape but will release them anyway, which would make the move seem like a goodwill gesture on the North’s part.

Another source said it’s unlikely the North will physically abuse the detained journalists.

The source said the North would want the Americans, once released, to go home and tell the press that, for all the questioning, they were otherwise given food and a place to stay. That, in turn, would paint a less hostile picture of the communist state.