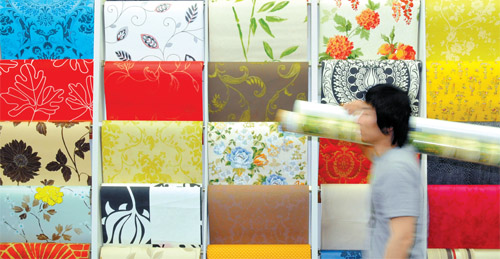 Wallpaper selections on display at a shop at Bangsan Wallpaper Market in Jung District, Seoul. By Jeon Min-kyu

Reeling from a recent breakup with her boyfriend of two years, Shin Ji-seon, 31, thought replacing the wallpaper in her room would be a refreshing change.

So last Wednesday, upon her mother’s recommendation, she headed for Bangsan Wallpaper Market to paper over that failed love affair. 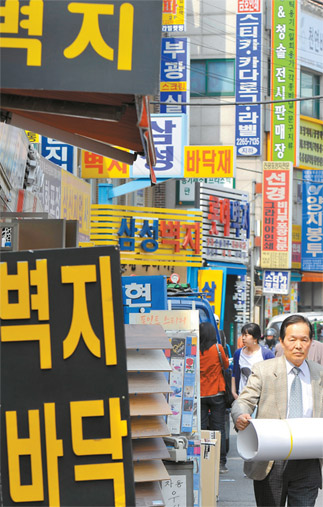 “I see lots of colorful, pretty wallpaper here that is changing my mood for better,” said Shin while hopping from shop to shop along the 200-meter stretch of the Seoul market. “I will cover my walls with one of the patterns that I saw today. I wish I could get a new boyfriend who looks as good as this wallpaper,” she chuckled.

Wallpaper used to be just one of many items sold at the open-air Bangsan market, located in an 18,500-square-meter area near Cheonggye Stream.

Because of a variety of industrial goods sold there, Bangsan market, established in 1987, was once better known for wares such as vinyl, towels and printing services, among others. Wallpaper only became a major product several years ago, market watchers said.

The wallpaper section of the market, merchants claim, has emerged as a lively representative of Bangsan despite the current economic turbulence.

“Like many other places, Bangsan market is suffering from the economic crisis, but the wallpaper market has not been hit as hard as other sectors,” said Kim Sun-gil, the head of the association of Bangsan wallpaper shop owners. 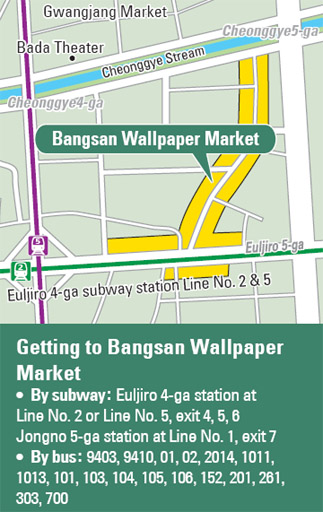 “I don’t know precisely why this is, but it seems that the demand for wallpapers is always out there as long as people own homes,” Kim said. “We also have a constant pool of people trying to sell wallpaper.”

The roots of Bangsan wallpaper market can be traced back further than the market’s official launch two decades ago. Several merchants sold wallpaper in the area beginning in the early 1970s, merchants said. The number of wallpaper shops has mushroomed to around 60 since then, they said.

The wallpaper market is also expanding its physical presence with some wallpaper shops spilling out into Chungbu Market, another outdoor market across the street from Bangsan, in recent years.

“Here [at Chungbu Market], I was able to find a large space to do business,” said the owner of Bangsan Joeun Wallpaper. He said most shops in Bangsan market are smaller than 12 pyeong (about 40 square meters), but his shop is 50 pyeong (about 166 square meters).

Kwon Ki-wan, the owner of a smaller shop called Cheo-eum-cheo-reom, which translates into “like the first time” in English, said two of his employees travel to any city in the country to renovate customers’ homes.

The price of his services goes up according to the size of the home, Kwon said. For instance, his shop charges 1.4 to 1.6 million won to re-paper and re-tile a 105.8-square-meter apartment, including the cost of materials. For a 79.3-square-meter apartment, the price goes down to 1 to 1.1 million won. If a homeowner only wants new wallpaper, it costs about 40 percent of the above rates, Kwon said.

Kwon claims his services are cheaper and of higher quality than those provided by any other wallpaper purveyor in the country.

Attracted by many wallpaper merchants in the market, customers from many parts of the country keep coming to visit Bangsan, vendors said. Some even come from overseas.

According to the wallpaper shop owners, the market is steadily drawing more customers from China, Mongolia and some Central Asian countries.

Tamir Erdenbileg from Mongolia, who is marketing director of a Mongolian building contractor, came with colleagues from his home country and a Korean interpreter when they went shopping at the Bangsan wallpaper market last week.

Erdenbileg said he comes to the Bangsan wallpaper market once a year.

“It [wallpaper] is more expensive here than it is in China, but we come here because of the quality,” he said.

The future for Bangsan wallpaper shops, however, is not guaranteed. Vendors worry that online shopping malls are snatching up the market’s main customer base of women over 40 and younger people.

The mushrooming wallpaper shopping streets in other regions has also drawn away many customers. One such area is a wallpaper market in Nonhyeon-dong, Gangnam, which sells mostly imported goods to affluent customers.

Kim of the association of Bangsan wallpaper shop owners, said members are meeting once a month to come up with a better business strategy together.

“We are talking about ways to improve our services,” Kim said.

The Jung District Office, which operates the market, is also supporting the sellers at Bangsan.

“We are helping wallpaper shops here as we do many other traditional shops at Bangsan market,” said Yoon Yeo-jeon, an official of the office.

“They are valuable retailers not only for our district but for people in general.”