What is the university admissions officer system?

What is the university admissions officer system? 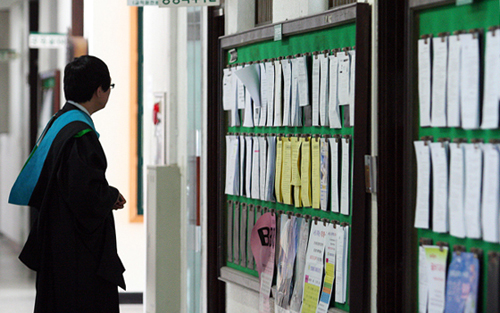 A large number of universities in Korea announced recently that they are introducing an admissions officer system for 2010 admissions. That year, the number of students to be selected through the new system is expected to exceed 10,000 in over 40 universities nationwide.

Meanwhile, only a handful of schools, spearheaded by Seoul National University, have adopted the system on a trial basis this year. Some special high schools such as science high schools have unveiled plans to implement the system as well.

What is the admissions officer system? It is part of the government’s drive to reform the college admission procedure. 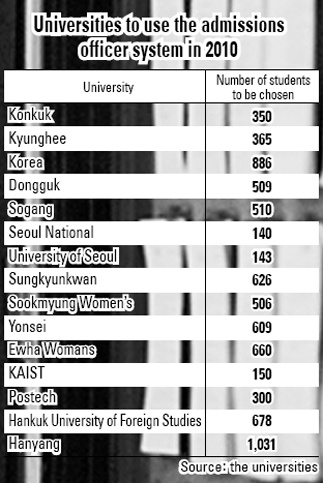 Over the past decades, the process for selection has been dominated by annual college entrance examination scores and high school grades.

By having admissions officers base selection on a variety of criteria, education authorities aim to cool the country’s over-heated private education market.

Recent data from the National Statistical Office showed that Koreans spend over $20 billion annually on private education, mainly due to extreme competition among parents to get their children into prestigious high schools and universities.

Earlier last month, the Education Ministry said it would give out a combined 23.6 billion won ($17.8 million) to more than 40 universities to help them kick start admissions officer programs this year.

A school may receive up to 3 billion won next year, an increase of 1 billion won since the ministry began providing universities with subsidies totaling 2 billion won in 2007 to employ admissions officers.

The budget increased to 15.7 billion won for college admission this year at 40 schools.


Who are the admissions officers?

They are defined as “educational experts” who work independently of other administrative units at the university and whose role is devoted to the holistic review of applicants for admission throughout the year.

They are supposed to decide on admissions after assessing a student’s potential, creativity, aptitude and expertise, if there is any. Some universities have employed former high school or middle school teachers and principals.

Before the system was launched, some universities had “admission committee members” who played a similar role; in others, professors or university staff in admission-related departments performed some relevant duties.


Awards out, potential in

This year, more universities have decided to implement the new admission system after the Korea Advanced Institute of Science and Technology in Daejeon announced 20 percent of its admission quota next year would come through the new system.

Kaist President Suh Nam-pyo said the university will recruit students who may not have very good grades but excel in specific fields or have great potential for future growth.

He noted that winning awards in math or science competitions will not be taken into account in admissions. He said such tests encourage private education.

Similarly, Pohang University of Science and Technology in Pohang, North Gyeongsang, announced it will select all 300 of its new batch of students through the new procedure. Hanyang University said it will pick 1,031; Korea University, 886; Hankuk University of Foreign Studies, 678; and Sungkyunkwan University, 626. Those numbers represent at least 20 percent of each university’s total enrollment.

However, some people are already starting to raise questions about the fairness and credibility of the admissions officer system.

Although a range of factors are considered - national scholastic aptitude test results, interviews and transcripts - admissions officers have the authority to make the final decision.

Also, it is not universally agreed what “potential” is and how to identify it. Students who have high test scores may fail to get a place, while some who get accepted may not have done well in exams. If so, will those applicants accept the admissions officer’s decision?

The United States implemented its admissions officer system in the 1920s. Some research has suggested that the country introduced the system with the hidden purpose of filtering out Jewish applicants.

Jerome Karabel, professor of sociology at the University of California, Berkeley, contends in the book “The Chosen: The Hidden History of Admission and Exclusion at Harvard, Yale, and Princeton” that the sudden reduction in Jewish students in the Ivy League in the 1920s had been an unintended consequence of some otherwise-legitimate admissions policy.

Park Nam-gi, a professor at Gwangju National University of Education, said in a paper on “Securing Fairness in the Admissions Officer System” that unless universities successfully gain society’s trust, the system won’t easily take root.

“The education authority should come up with a systematic device to gauge the fairness of the admissions officer system so that everybody can rely on and trust it completely,” he said.

With the goal of making the system more trustworthy, Korea’s top Seoul National University last year invited Doris Davis, associate provost of admissions and enrollment at Cornell University, who has 30 years of experience as an admissions officer, to act as a consultant.

“The role of Seoul National University is crucial in having the new system successfully settled,” Davis said.

The Education Ministry said a month earlier it would choose around five educational institutions, such as university-run continuing education centers, to train future admissions officers.