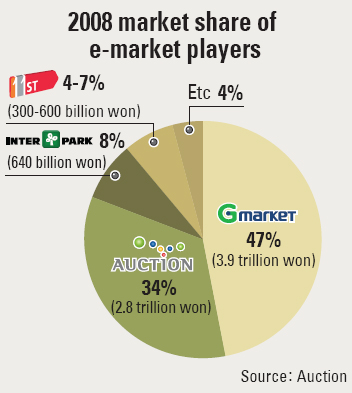 It is eBay’s second acquisition notice since it bought a stake in 2001 in Internet Auction Company, Korea’s second-largest online marketplace with more than 21 million registered users. Under the terms of an agreement made at its head office in California, eBay will offer $24 per share for Gmarket, totaling up to a $1.2 billion purchase price. It will hold at least 67 percent of Gmarket’s shares, according to eBay.

“The combination of Gmarket and IAC establishes an exceptionally strong leadership position for eBay in one of the world’s largest, most dynamic and innovative e-commerce markets,” said John Donahoe, eBay’s president and CEO. He visited Korea last week to negotiate final terms of the acquisition.

“This deal creates strong operational synergies between the two market leaders, offers more opportunities for sellers and enhances our ability to serve complementary consumer segments,” he added. As predicted by the online marketplace industry, eBay is hoping that its alliance with Gmarket will provide a potential platform for further expansion in Asia.

Why did it choose the Korean online e-market? Korea is one of the most wired countries in the world - its Internet penetration rate has risen from 70.2 percent in 2004 to 77.1 percent in 2008, according to the National Statistical Office. Its online shopping penetration rate has also grown, according to the National Internet Development Agency of Korea.

“We welcome eBay’s investment in Gmarket,” said Ku Young-bae, Gmarket’s president and CEO, yesterday. “This transaction will provide us an excellent opportunity for our next growth stage in Korea and will also help accelerate our expansion strategies beyond Korea.”

There are concerns, however, that the merging of the two top online e-marketers could create market dominance. Currently, Gmarket holds the largest e-market share at 47 percent, followed by Auction at 34 percent. Another major player is 11st Street, operated by SK Telecom, an affiliate of the country’s No. 3 conglomerate, SK Group. Regarding the concerns, one of the conditions stated by the Fair Trade Commission prior to approving eBay’s possible acquisition of Gmarket last fall, was that the joint company will not raise its sales commission for the next three years. Final approval of the deal is expected in the second quarter of this year.