The wisdom of 85 years of history

The wisdom of 85 years of history 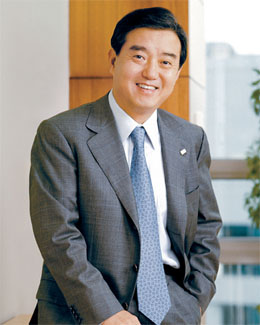 In a country where capitalism truly began to blossom only a few decades ago, a business that has operated continuously for over 85 years is virtually unheard of.

Samyang Corporation, founded in 1924, has seen the rise and fall of many. Some, like Samsung and Hyundai, have grown into global business giants. Others disappeared without a trace.

Starting out as a farming company, Samyang now has 12 affiliates that last year earned a total of 3.7 trillion won ($2.9 billion). In 2007, it was ranked the 68th-largest domestic business group - including public corporations.

Its longevity makes Samyang Corporation, currently led by one of the founder’s grandsons, among the most studied local companies at Korean business schools.

The secret behind that longevity, despite minimal efforts to promote its corporate identity, has long been the subject of academic curiosity.

“Samyang Corporation has been able to record a stable profit for so long,” said Cho Dong-sung, a business administration professor at Seoul National University, “by focusing on businesses that may be without high consumer-awareness but are indispensable to our lives.”

As you can see, this is not the maker of that Samyang ramen that crowds convenience store shelves.

The main businesses of Samyang Corporation range from chemicals and food ingredients to pharmaceuticals - all essentials in business but invisible to the end consumers.

Because of this, the company felt it unnecessary to promote its corporate identity until a scandal surrounding the maker of Samyang ramen - which is owned by another conglomerate with whom Samyang shares nothing but its name - broke out 20 years ago.

When a nationwide consumer boycott of market leader Samyang Ramen broke out in 1989 as punishment for news the company had used industrial oil in its ramen, Samyang Corporation was also bombarded with protest calls.

According to officials, this led executives to support the suggestion that the company start to put up ads asserting, “Samyang Corporation does not make ramen.” But that idea was put aside at the request of Kim Sang-ha, then Samyang Corporation chairman and son of the founder, Kim Yeon-su. 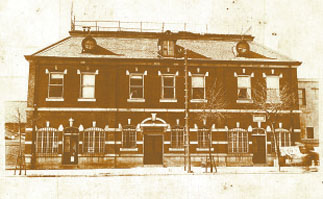 The old headquarters of Samyang Corporation, one of the oldest companies in Korea, in what now is Taepyeongno, Seoul, as it appeared in the 1930s.

“It is not virtuous to rub salt in the other’s wounds,” Kim Sang-ha reportedly said.

This long-term view may be the wisdom Samyang has gained over three generations of doing business. The founder Kim Yeon-su was the younger brother of Kim Seong-su, who established Korea University, long placed among the most prestigious universities in Korea.

Just as his older brother aimed to nurture Korea’s talents, Kim Yeon-su pursued a vision “to cultivate national capital” when he founded the company.

Kim purchased farmland in the Jeolla provinces and established Samsu Company to run an industrial farm named Jangseong Farm on the land in October 1924. It was during the Japanese colonial period, when Japan was buying up massive tracts of Korean land through the Oriental Colonization Company.

Seven years later, Samsu Company was renamed Samyang Corporation. The task of running the conglomerate is now in the hands of the grandsons of Kim Yeon-su.

After taking office as chairman, Kim Yoon launched a new corporate identity and with it a new slogan for the group: “Ingredients that add value to life.” Under his leadership, Samyang Corporation has realigned its chemical, food, pharmaceutical and new businesses.

Seeking new growth engines through expansion is also an area of interest to the new regime in recent years. Samyang took over Seven Springs, a family restaurant chain, in 2006 and has been running a bakery cafe named “Mix and Bake” since 2003. 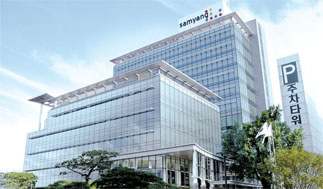 The new Samyang headquarters, in Yeonji-dong, Seoul, renovated in 2003. Provided by the company

Kim Won joined Samyang in 1988. He took classes in various fields - from hands-on factory experience to research. With an engineering background, he is known for his shrewd business analysis.

He has pushed forward to make Samyang Genex a global food enterprise and as part of those efforts established a factory in Qinhuangdao, China.

Cho Byung-lin, executive vice president of Samyang Corporation, climbed his way up the Samyang ladder as a specialist in personnel management. He is the first Korean to earn a coaching expert license at the Linkage program in Britain, a world-class personnel management coaching program.

Kim Myung-ki, executive vice president of Samyang Corporation, is known for a bulldozer-like drive. He is currently playing a crucial role in the group-wide strategy implementation process.

Choi Jae-ho, president and COO of Samnam Petrochemical, a fiber material maker, is an expert in the chemical business. He worked at the Tokyo branch in Japan, an experience insiders credit to his minute and precise market research.

Choi Doo-jin, president of Samyang Milmax Corporation, a flour maker, joined Samyang in 1976 and served as the head of the Samyang research center, the fiber business team and the Vietnamese unit.

Park Ho-jin, president of Samyang Kasei, a polycarbonate producer, is an engineer who built a 20-year field career on the assembly lines of Samyang and its affiliates. He moved to Samyang Kasei in 1989, where he laid the groundwork for the company to develop into a leader of the local chemical industry.

Byun Soo-sik, president at Samyang Data System, an information and technology firm, is an innovator in the Information and Technology sector. He served on the enterprise resource planning team, IT strategy team and process innovation team.

Park So-moon, president of Samyang Welfood Corporation, a margarine and shortening maker, worked at the top in various fields ranging from funding to public relations, food sales and supply chain management. He was named the head of Samyang Welfood last month.