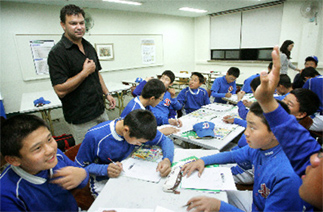 A native speaker teaches English to members of a baseball team at Duksu Middle School, central Seoul. The Jung District Office-sponsored class aims to help athletes who dream of becoming the next Park Chan-ho. By Oh Sang-min

Twenty students dressed in baseball uniforms are busy playing a game at Duksu Middle School in Jung District, central Seoul. But it’s not a ball game. These students are competing in teams in an English conversation class. The team that makes fewer mistakes with the day’s practice dialogue earns one run, gaining advantage over the other team. And just like in baseball, the team with the most runs wins the game.

These students are part of the school’s 35-member baseball team. Three times a week, they take part in English classes taught by native English speakers dispatched from Dongguk University’s Institute of International Education.

Duksu became the fourth beneficiary of the after-school English program that Jung District Office launched in 2005. Starting with Cheonggu Elementary School’s baseball team, the local government program was expanded to include Kwanghee Elementary School’s football team in 2006 and Jangchung Elementary School’s ping-pong team in 2007. Those teams are all noted for winning a range of domestic competitions and producing sports stars.

Jung District Office says it devised the program to help athletic teams of schools in the district learn English, with a vision that some of them might become the next Park Chan-ho, a Major League pitcher; Park Ji-sung, a Manchester United striker; or Kim Yu-na, the figure-skating superstar. Those sports stars have impressed overseas audiences not only in their sporting performances, but also in media interviews and press conferences with their fluent English.

“Young athletes here could one day become sports diplomats for Korea in the global arena with their English skills honed through this program,” said Choi Bae-jin, an official in the English support division of the district office.

“Since they are sports players and friends, it is very hard to control them at times. But looking at the positive side, they are very fast learners, probably because they are more outgoing and active than others,” said Roddy Bancroft, a full-time lecturer at Dongguk who has been participating in the program since its beginning. “Some of them have surprised me because their English is amazingly good even though they have never taken private instruction.”

The class runs from 6:30 to 8 p.m. with one break. In the first half of the class, students learn vocabulary and sentences from an all-English textbook. The teacher writes sentences with some blanks on the whiteboard and randomly picks kids to read them out and fill in the right words. An assistant, a bilingual Dongguk University student, helps students who are having a hard time keeping up.

Bancroft says he uses games in the latter half of the class to help students review what they have learned without getting bored. Since they come to class after more than six hours of regular classes and a few hours of baseball practice, some are already very exhausted, “which is quite understandable,” he said.

“It’s true that I am tired now but I know that athletes are not only supposed to be good at sports but also at studying,” Oh Seung-huan, a third grader and the captain of his baseball team. He says his goal is to become like the New York Yankees’ Alex Rodriguez.

First-grader Cho Eyu-yeon has been lucky to participate twice in the program. He is a graduate of Cheonggu Elementary School, where he was also on the school’s baseball team. “I think it’s more fun to learn from a native speaker and I can sense my English is getting better,” he said. He also wants to become a Major League baseball player.

According to Heo Ji-hun, the team coach, most of the players have the goal of playing in the Major League.

Choi says Jung District is the sole administrative unit in Korea to be designated as a “special English education zone” after the Knowledge Ministry encouraged administrative units to specialize in at least one sector, starting in 2007.

In addition to providing free English lessons to sports teams, the district office pays the cost of sending sixth graders at its 12 elementary schools to five-day English camps annually. Also, the office covers the costs for allocating up to two native English teachers to elementary, middle and high schools in the district. Choi said the office aims to extend the athlete English training program to high schools next year.