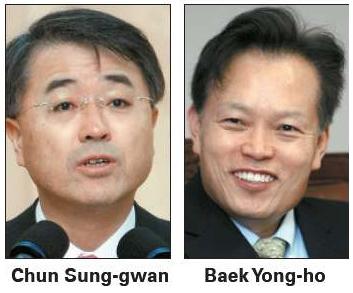 After the National Assembly’s non-binding confirmation hearings, the two nominees will be officially appointed to these two powerful posts.

Chun, 52, will replace Lim Chae-jin, the former prosecutor-general who stepped down amid growing criticism over the death of former President Roh Moo-hyun. Baek, 53, will take over the tax agency’s head position, which has been vacant since the former tax agency chief Han Sang-yool, implicated in a corruption case, resigned from the post in January.

“In accordance with the changing times, Chun has the leadership to transform the prosecution into a future-oriented organization, one that will have more trust from the people,” Blue House spokesman Lee Dong-kwan said.

Observers predict Chun’s appointment might lead to a generational change in the prosecution. He has three years less experience than his predecessor, Lim Chae-jin, which means Chun’s seniors will be pressed to step down.

Seven senior prosecutors are currently senior to Chun. In the hierarchal world of prosecutors, retiring from one’s post to make way for a younger person has long remained a practice if a junior prosecutor is appointed to a higher post than his seniors.

“It is likely that Chun’s seven seniors and some of his colleagues will leave their posts. A significant personnel shake-up is inevitable,” a senior prosecutor, who wished to remain unnamed, said.

Meanwhile, presidential spokesman Lee said Baek should be credited for advancing the government’s fair trade affairs while at the Fair Trade Commission. “He is the right kind of outside figure who can reform the National Tax Service,” he said.

Baek, born in Boryeong, South Chungcheong, graduated from Chung-Ang University. He was vice director of the Yeouido Institute, a Grand National Party think tank. He was chief economic policy adviser at the Barun Policy Institute, which advised President Lee on economic policies during his presidential campaign.

Tax officials, who are generally known to be rather conformist as a group, were rocked by Baek’s unconventional nomination as the appointment was unexpected - Baek has no experience in tax affairs compared to senior tax officials.

“I assume President Lee figured it was hard for him to achieve his goals with [current] tax office personnel,” said a senior tax official on condition of anonymity. Some tax officials said they are not certain whether Baek can manage the National Tax Service. It has 20,000 officials while his Fair Trade Commission was a relatively small organization with only 500 officials.

The fact that he does not have experience in tax policies and he didn’t major in accounting added to the concern, some officials said.

“No matter who becomes the head of the National Tax Office, the organization of the tax office will remain alive. It will be of the utmost importance for [Baek] to win the hearts of tax workers with his first personnel changes,” another National Tax Service official said.