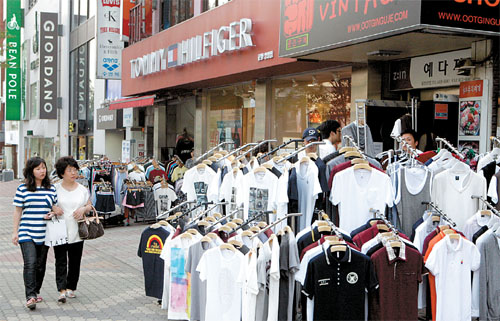 Park Jin-ok, 34, a Busan resident, says that ever since the late 1990s, she’s been a frequent visitor to Munjeong-dong’s discount outlet street (Munjeong-dong Rodeo street) in southeastern Seoul.

As she tried on two Jill Stuart summer dresses, discounted about 50 percent, in Mods Shopping Mall in Munjeong-dong last week, Park recalled, “I remember when I was a college student during the 1990s and every time I visited this street, I’d have to wait at least 10 to 20 minutes before I could get into one of the ‘popular’ stores back then like Nix or Levi’s.”

The outlet street was the first of its kind in Korea. During the 1980s, the area, which starts from near Munjeong Station, was mainly a residential area with a few distribution centers and design studios.

“The clothing distribution centers often had a surplus that used to be sold on the spot here,” said Lee Jong-duk, president of MoonJung Rodeo Federation, at his office located at the start of the discount outlet street near the subway station.

“Also, Munjeong-dong has a geographical advantage to include a street such as this one because it connects Seoul and Gyeonggi, attracting people from both areas,” Lee said.

Starting in about 1993, big companies such as SS Fashion and Handsome took notice of the transactions in Munjeong-dong, and decided to launch outlets for leftover clothes from department store sales.

By the end of the 1990s, there were over 100 brands featured in the area. At present, there are around 200 brands selling discount products from 30 percent all the way up to 80 percent off the original price.

According to the federation, the popularity of Munjeong-dong outlet street peaked during the 1990s. Kim Tai-kyung, president of Mods Shopping Mall, a three-story shopping mall with around 20 clothing brands in the center of the street, said the area wasn’t affected by the Asian financial crisis a decade ago.

“Although the retail sector in general was in a bad state, Munjeong-dong did pretty well because Japanese tourists took advantage of the currency situation,” Kim said.

Lee said that around 30 percent of all customers during the late 1990s were tourists, mainly from Japan at first, and then afterward, from places like Hong Kong, Taiwan and China.

“Tour guides at major hotels in Seoul, including Lotte Hotel, promoted the Munjeong-dong outlet street as a must-see tourist destination at that time. Visiting the street was a part of the tourist schedule for major tour companies here.”

When the street first got the media’s attention in 1993 and 1994, there were so many visitors during the weekends that not all of them could fit inside the buildings at the same time. 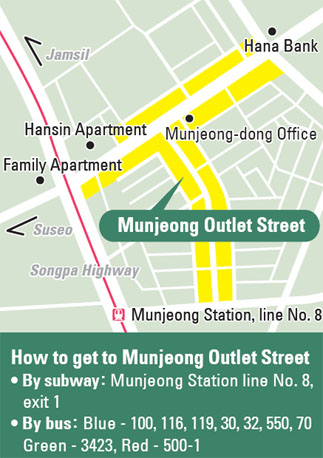 “We had to separate them into groups, each one having around 10 to 20 minutes of shopping time,” said Lee.

“The outlet shop salespeople here used to be the epitome of rudeness. They didn’t need to be nice because customers would return either way. There were also no return policies,” Lee said.

This popularity led to some brands outsourcing to companies other than their own to make items solely to be sold in outlet road shops.

In other words, instead of the shops selling leftover products from original sales in department stores or road shops, some of the products with the brand-name tags were made just to be sold at Munjeong-dong.

Although some brands still make outlet-only products, the practice is dying, the federation says.

According to Kim, younger customers in their 20s and 30s were the main visitors but now the main age group is people, especially women, in their 30s and 40s.

In addition to regular shoppers, the street has started attracting retail merchants from regional cities as well.

“Shopkeepers from all over the country started shopping in Munjeong-dong for deals on popular brands. They would buy, for example, a shirt which cost 500,000 won [$389] originally in department stores, for 100,000 won in Munjeong-dong and then sell it again at around 300,000 won,” said Lee.

Despite the global economic crisis, the street is doing fairly well. Daily sales on weekends total 40 million won to 50 million won on average, according to the federation, and there are hundreds of visitors.

The brands that have been on the street from the beginning, including System and Levi’s, are still present, along with most popular imported or local brands, ranging from clothing to accessories and shoes sold in Korea.

A woman walks through an entrance of a shopping mall on Munjeong-dong outlet street, southeastern Seoul, last Friday. Right: A shopper at Munjeong-dong’s Modes Shopping Mall looks at clothing on sale last Friday. By Jeon Min-gyu

“This street is a one-stop shopping experience, which makes it very convenient for people like myself who are not too fond of shopping,” said Lee Sung-taek, 38, an office worker who lives in Jamsil, southern Seoul.

“I’ve been to newer outlet towns in and around Seoul but Munjeong-dong, being the oldest, features the most brands and a wider selection.”

Lee said that the street has been benchmarked by numerous regional governments trying to boost their economy.

“Regional festivals are not too effective these days for boosting local economies because they last for a short time and are poorly advertised. Streets like the Munjeong-dong outlet street, however, are here to stay, making them easier to market,” he added.