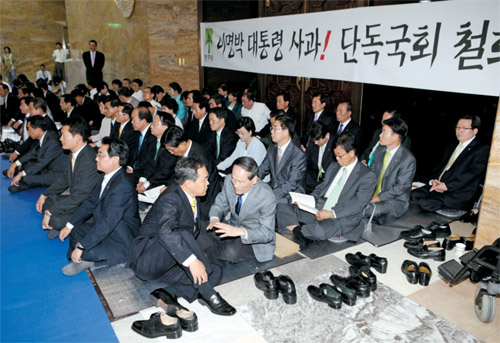 The Democratic Party holds a lawmakers’ meeting yesterday in front of the main conference hall of the National Assembly in Yeouido, Seoul. Some hard-line assemblymen of the main opposition party have been staging sit-in protests there since June 23 to block the ruling Grand National Party from opening plenary sessions to pass sensitive bills. By Kim Hyung-soo

On the final day of the two-year grace period, the ruling and opposition parties continued to spar over the fate of the non-regular workforce yesterday, but failed to strike a deal.

“The negotiations ended with no agreement,” said Grand National Rep. Cho Won-jin, who participated in the meeting with the Democratic Party’s Kim Jae-yun and the Liberty Forward Party’s Kwon Sun-taik. The three lawmakers’ talks broke down after just 10 minutes.

The ruling and opposition parties left room for further negotiations later in the evening, but prospects appeared bleak at press time as the GNP and DP looked no closer to reaching a compromise.

Starting today, about 700,000 non-regular workers who have worked in their posts for more than two years may be offered regular contracts, or they might be sacked. Companies could be reluctant to upgrade workers’ contracts in the current economic climate. 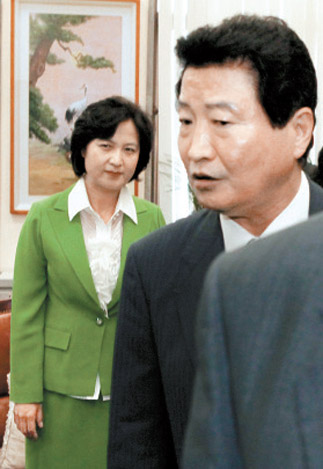 The Democratic Party insisted on a six-month grace period, while the Liberty Forward Party presented a compromise, proposing grace period extensions depending on the size of the businesses.

The nation’s umbrella labor unions have already made it clear that they will not accept any discussion on a possible delay of the current law’s implementation, demanding the immediate upgrade of non-regular workers’ status.

“There is nothing more we can concede,” said Ahn Sang-soo, floor leader of the GNP. “The ball is in the Democratic Party’s court. They will be responsible for all unfortunate situations arising from the legislature’s failure to revise the non-regular workforce law.”

However, DP floor leader Lee Kang-rae insisted that the umbrella labor unions support its proposal. “The GNP is responsible for the aftermath because it has not accepted our proposal.”

The GNP asked DP Rep. Choo Mi-ae, who heads the standing committee on labor, to open a session to discuss a possible revision, but Choo refused to do so, citing that the labor community has not agreed with any of the lawmakers’ proposals.

The GNP also asked National Assembly Speaker Kim Hyung-o to use his power to directly introduce the revision bill, but Kim did not do so yesterday. Prime Minister Han Seung-soo also paid a visit to Kim to seek cooperation, but Kim said, “There is no public consensus formed yet.”

Democrats started a sit-in at the main hall of the legislature, vowing to block the Grand Nationals’ attempt to revise the labor statute by using its majority.