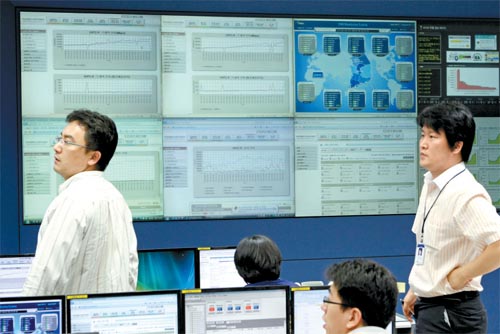 Cyberspace security agents of the Korea Information Security Agency monitor the damage of the ongoing cyber attacks yesterday at the office of the agency in Garak-dong, Seoul. By Oh Jong-taek


The National Intelligence Service has told South Korean legislators that it has specific intelligence that the North Korean military last month called for cyber attacks against South Korea, the JoongAng Ilbo has learned.

According to multiple committee members who were present at the meeting, the spy agency said North Korea ordered a laboratory under the reconnaissance bureau of the Ministry of the People’s Armed Forces to “destroy South Korea’s puppet communications networks in an instant.”

The committee members said the spy agency presented specific intelligence, such as that the North directed the lab to develop malignant codes and to operate a unit of hackers. The lab, titled Research Institute No. 110, is responsible for carrying out cyber terrorism in North Korea.

In addition, committee members said the service mentioned the presence of North Korean agents in Beijing and Shenyang in China, where they have set up overseas bases for cyber terrorism.

“The spy agency said one Eastern European nation that has been friendly with North Korea has also emerged as an overseas headquarters, and that the South Korean government is trying to work with that European country to share intelligence,” said one participant at the meeting.

When attacks to key government Web sites in South Korea and the United States began earlier this week, the National Intelligence Service argued North Korea was responsible. But the agency was criticized by opposition lawmakers for lacking concrete evidence to back its claim.

In response to its intelligence, the agency told legislators that from June 8 to 12, it conducted simulated defense drills in conjunction with the National Cyber Security Center and the Korea Information Security Agency. The National Intelligence Service also briefed lawmakers that around U.S. Independence Day on July 4, there were indications of cyber attacks on major U.S. Web sites, including that of the White House, and that intelligence officials in Seoul and Washington were bracing themselves for possible action.

Chung Chin-sup, the GNP representative on the Intelligence Committee, said, “While the agency didn’t reveal its sources for security reasons, its intelligence seems to have sufficient technical foundation.”

But his Democratic Party counterpart, Park Young-sun, charged that the evidence “was all circumstantial.”

“The U.S. State Department has said it can’t confirm North Korea’s involvement, but our intelligence body is arguing the North is behind all this,” Park said. “This is hasty action on our part.”

The State Department was under cyber attack for a fourth day, but its spokesman Ian Kelly said, “I have no information ... of North Korean involvement.”