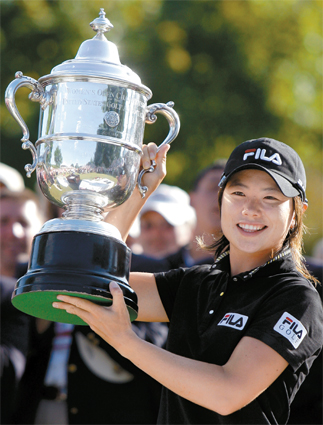 Ji Eun-hee made an impressive come-from-behind charge to win her first major championship yesterday after rolling in a 20-foot birdie putt on the final hole of the U.S. Women’s Open.

The 23-year-old recorded an even-par 71 in the final round for a level-par 284 total to defeat Taiwan’s Candie Kung by one stroke at the Saucon Valley Country Club in Bethlehem, Pennsylvania.

Ji struggled early on the final day of competition, making a double-bogey midway through the final round of play. But errant early play actually helped ease her nerves and served as the turning point as the young golfer entered the final stretch of the competition.

The double-bogey came on the 10th hole. Ji was a shot off the lead heading into the hole. After her first and second shots landed in bunkers, Ji was able to finally chip the ball onto the green and take a six.

“I had birdied on No. 8 and that drove me to get ahead of myself and think about the possibility of winning the championship,” Ji explained. “I was able to calm down after the double-bogey on the 10th and it was one of the factors of winning this tournament. Up until that point, Cristie Kerr was so far ahead, and I just didn’t think anyone was going to be able to catch up with her. I basically cleared my mind at that point.”

Ji went on to birdie on the 13th and 14th to tie for the lead with Kerr, Kim In-kyung and Candie Kung. Kim and Kerr faded with bogeys and Ji was left with Kung on the 18th.

“Preparing to tee off on the 18th, I was focused on avoiding the bunker but the shot landed on the fairway,” Ji said.

She went on to hit the next shot with a six-iron which led to a putt from about 6 yards out.

“I was really nervous - nervous to the point where my hands were shaking,” said Ji about preparing for the decisive putt. “Not much went through my mind after draining the shot, I was just happy to have won. I began to tear up when I saw my mother.”

Ji’s only other LPGA Tour title was at the Wegmans LPGA, last June.