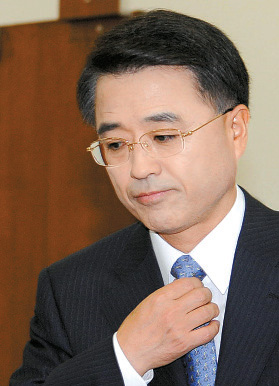 After corruption allegations forced President Lee Myung-bak to withdraw the nomination of Chun Sung-gwan as new prosecutor-general, Chung Tong-gi, senior civil affairs secretary to the president, offered yesterday to resign for failing to vet Chun’s fitness for the job.

In a meeting with senior secretaries yesterday morning, President Lee spoke sternly about the Chun debacle.

“Prosecutors are responsible for investigating people who commit wrongdoings and lie,” President Lee was quoted as saying by his spokesman, Lee Dong-kwan. “Keeping that in mind, it is unacceptable that the highest prosecutor lied at the confirmation hearing of the National Assembly. It is a matter directly related to the people’s trust in government. Withdrawing the nomination was unavoidable.”

At the National Assembly hearing earlier this week, Chun allegedly lied about an overseas golfing trip with a businessman. He was also accused of conducting dubious financial transactions. Chun had borrowed 1.5 billion won ($1.2 million) from the same businessman to purchase a luxury apartment, Democratic Party lawmakers revealed at the confirmation hearing.

The Blue House spokesman said honesty and responsibility are the requirements for top officials of the Lee administration. He said Chun failed to have those qualities.

According to the spokesman, Senior Civil Affairs Secretary Chung apologized during the meeting for causing political turmoil by failing to thoroughly verify Chun’s qualifications. “I will take complete responsibility and step down,” Chung was quoted as saying by the Blue House spokesman.

It remains to be seen if the president will accept Chung’s resignation.

The spokesman also denied speculation that Chun had been nominated through an external connection, not through the Blue House system of selecting and verifying the qualifications of top public servant candidates.

President Lee’s decision to appoint Chun as the new prosecution leader was announced in June. At the time, the Blue House said Chun was judged to be the right person for the job because of his conviction to uphold the law and his ability to reform the prosecution.

The nomination was met with great surprise because Chun, 52, had less experience in his career than other possible candidates. The appointment prompted eight veteran prosecutors who were senior to Chun to resign in the customary hierarchal practice of prosecutors.

Despite a leadership vacuum in the prosecution office, the Blue House said it will take time to find a new suitable candidate. “We are now back to square one,” said the president’s spokesman. “We do not want to repeat the same mistake. It will take some time, and we will not rush.”

The Blue House, however, made clear that it will immediately work to modify its verification system for top public servant candidates. Following the Chun resignation, concerns have grown about the presidential office’s ability to verify candidate qualifications. Even Blue House and Grand National Party officials are worried about the breakdown.

Chun’s flop is not the first time that a nominee of a top government post failed to make the grade. Shortly after his election, Lee’s initial picks for the unification, environment and gender equality ministers stepped aside after being accused of real estate speculation and tax evasion.

The presidential transition team later admitted that there were shortcomings in the verification of their qualifications.

The situation, however, did not improve even after the Lee administration was launched. Two months into Lee’s term, Park Mee-sok, senior presidential secretary for social policy, stepped down over a plagiarism scandal. Two months later, Kim Soung-yee, health and welfare minister, resigned over the same allegation.

Earlier this year, Bahk Byong-won, Blue House senior secretary for economic policy, stepped down after the Board of Audit and Inspection launched an investigation into his past activities as a chairman of Woori Finance Holdings. The probe was to determine if he had illegally ordered subordinates to make loans to a local company that was not eligible to borrow from Woori.

According to Blue House officials, the personnel affairs office creates a pool of candidates when a vacancy is created. The databases of the Ministry of Public Administration and Security, National Tax Service and the National Intelligence Service are used to vet the candidates and create a list of up to five top contenders. The list is presented to the president through the chief of staff, according to the Blue House officials.

The civil affairs office and the personnel affairs office of the Blue House, then, conduct a thorough investigation of the final candidates. Chun, according to the presidential office, was chosen after the screening process.

Acknowledging that 20 staff members in the civil and personnel affairs offices have a limited time to get to probe each candidate, a senior Blue House official said creating a new system is critical. “The final verification upon which to make the decision takes a lot of time, but when we appoint several officials simultaneously, it’s hard to check out everyone 100 percent,” the official said.

The Democratic Party did not miss the opportunity to attack the Lee administration following Chun’s demise as a candidate. “[The president] is the most responsible for making the appointment,” said DP Chairman Chung Sye-kyun. The conservative opposition Liberty Forward Party said that however late in the process, it was fortunate that the Blue House corrected its mistake.

“It was wrong to begin with when a surprise candidate was appointed to the lead the prosecution,” said Lee Hoi-chang, the head of the LFP. “But it is still fortunate that the Blue House admitted its wrongful choice and withdrew the nomination immediately.”

Concerns about the Blue House’s lack of ability to properly vet top official candidates were also repeated by a GNP lawmaker.

Representative Chin Soo-hee said yesterday in an interview with CBS radio that the civil affairs secretary’s office should have known of Chun’s shortcomings.

“It is regretful,” she said. “I think the Blue House needs to reorganize its structure so that a separate body can focus on personnel affairs.”