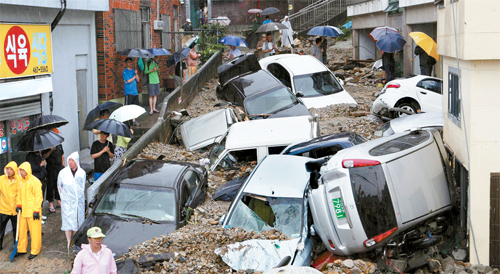 Ten cars were buried under mud and rubble caused by heavy rain in Sujeong-dong, eastern Busan yesterday. District officers took part in an emergency recovery operation clearing out the road. By Song Bong-geun

At least four people have been killed and two are missing, following severe storms in southern regions of the country yesterday.

A 66-year-old female farmer surnamed Jeon in Hadong County in South Gyeongsang drowned later in the morning and a 54-year-old female surnamed Shin in Yeonsan-dong, Busan, died when she was buried in a landslip at 10:40 a.m.

A man surnamed Hwang in Gwangyang, South Jeolla, went missing when he was caught in a sudden landslip, and a man surnamed Lee in Imsil County, North Jeolla, was swept away by an overflowing stream.

Meanwhile, over 290 elementary schools in Busan temporarily closed down yesterday. At 8:30 a.m. over 50 residents in a 15-story apartment in Busan had quickly evacuated when a massive landslip hit.

Some 36 houses in South Jeolla were flooded, and 81 hectares (200 acres) of farmland, 131 hectares of salt pan, and four salt storehouses in Shinan County, South Jeolla, were swept by flooding, which caused property damage estimated at 300 million won ($237,000).

The rain has been exceptionally heavy.

Busan has had its highest rainfall since records began in 1908. Over 900 millimeters (35 inches) fell between June 20 and yesterday. Seasonal rain arrived on the Korean Peninsula on June 20.

Suncheon in South Jeolla and Masan in South Gyeongsang came under nearly 1,000 millimeters of rain during the same period.

Suncheon has had its heaviest rainfall since 1973 and Masan since 1986.

Seoul had 635.9 millimeters of rain during the period whereas Gyeonggi and Gangwon areas had over 600 millimeters.