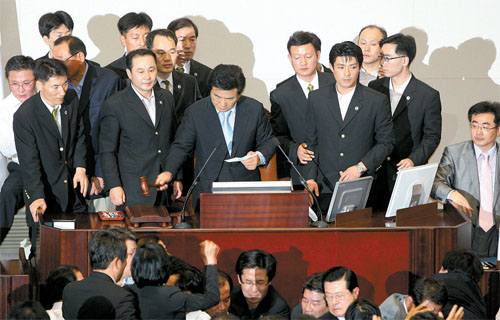 Deputy Assembly Speaker Lee Yoon-sung, at the speaker’s podium, announces the approval of media industry reform bills yesterday at the main chamber of the National Assembly, while scuffles between ruling and opposition lawmakers occurred. [YONHAP]

National Assembly Speaker Kim Hyong-o announced yesterday morning that he would exercise his power to call for a vote on media bills before the end of the day. “It’s time for the legislature to put an end to the yearlong debate,” Kim said. “We will vote on the bills today.”

Kim, then, had handed his authority to Deputy Assembly Speaker Lee Yoon-sung and remained outside the legislature. While the liberal opposition Democratic and Democratic Labor parties’ lawmakers physically skirmished to block the Grand Nationals, Lee stood at the speaker’s podium at 3:35 p.m. and opened the session. Three minutes later, tensions reached a crescendo as the bills were introduced. Opposition lawmakers struggled fiercely to block the voting, but the three bills all passed by 4:09 p.m.

Under the revised media laws, a newspaper company or a conglomerate will be able to invest in a broadcaster. However, they are barred from exercising management rights until 2012.

Although the revised laws restrain a newspaper giant with more than a 20 percent subscription rate from entering the broadcasting industry, the barrier effectively is not high enough to prevent any newspaper from making investments. A conglomerate with more than 10 trillion won ($8 billion) in assets is also barred from making an investment in a broadcaster.

The revisions made yesterday were more conservative than what the GNP had initially envisioned, because drafts were modified during the party’s internal discussions and negotiations with the Democrats. Media experts, however, noted that the changes are enough to end the country’s practice of banning cross-ownership of newspapers and broadcasters.

The DP chairman said opposition lawmakers will take their fight to the streets. He also said he and DP floor leader Lee Kang-rae will resign from their legislative posts in protest.

Representative Lee insisted that voting on the bills is invalid because the legislature failed to meet a quorum. The National Assembly currently has 294 members and the quorum for voting is 148. The Grand Nationals have 169 lawmakers, enough to pass a bill alone, but not all lawmakers managed to participate in yesterday’s crucial voting as the Democrats physically blocked them from doing so.

The first vote on the revision bill of the law governing newspapers attracted the participation of 162 lawmakers, with 152 voting in favor. The next voting for the law governing the broadcasting industry, however, did not proceed as smoothly. Only 145 lawmakers participated in the voting, which was not enough to meet a quorum.

After the vote, National Assembly deputy speaker Lee ordered the bill to be voted on again, with 153 lawmakers managing to cast electronic ballots. The bill was backed by 150 votes. The bill governing the Internet Protocol TV industry was voted on by 161 lawmakers, all of whom approved.

GNP and DP negotiators had talked for more than three hours on Tuesday evening to hammer out a deal, but failed. GNP floor leader Ahn Sang-soo announced yesterday morning that there would be no further talks.

Soon after Ahn’s declaration, ruling party lawmakers rushed to the main chamber of the legislature. By 9:16 a.m., they began surrounding the podium of the National Assembly speaker in preparation of a possible vote.

The GNP managed to open the main hall around 3:26 p.m. and dozens entered the room to cast votes.

Not all GNP lawmakers, however, did so. Representative Park Geun-hye, the former GNP chairwoman who had opposed drastic changes in the media industry, did not participate in the voting, but told journalists that she backed her party’s move.

Representative Lee Hoi-chang, head of the Liberty Forward Party, and most of the conservative opposition party’s lawmakers were also unable to enter the main chamber for voting. Watching the GNP and DP brawls through a live TV report, Lee said he had tried to vote for the media bills but couldn’t. He said he deplored the chaos inside the legislature.