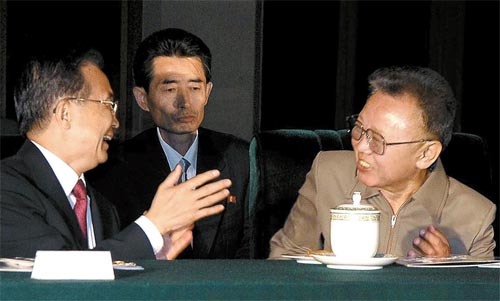 In this photo released yesterday by North Korea’s Korean Central News Agency via the Korea News Service in Tokyo, Chinese Premier Wen Jiabao, left, has a light moment with North Korean leader Kim Jong-il, right, as they watch propaganda shows known as “mass games” at a stadium in Pyongyang. [AP]


North Korea is ready to return to the six-party denuclearization talks depending on the outcome of its talks with the United States, the state media for both North Korea and China reported yesterday.

According to China’s Xinhua News Agency, North Korean leader Kim Jong-il told China’s premier Wen Jiabao in Pyongyang late Monday that North Korea was “willing to attend multilateral talks, including the six-party talks,” depending on the progress in the anticipated discussions with the United States.

Kim also pointed to Pyongyang’s efforts to achieve denuclearization of the Korean Peninsula, saying it was at “the behest of President Kim Il Sung,” referring to his late father and former leader of North Korea.

Wen completed his three-day visit to Pyongyang yesterday. He traveled there to commemorate the 60th anniversary of diplomatic relations between China and North Korea. While the official agenda of his meeting with Kim included economy, trade, education and tourism, analysts had expected the nuclear issue to be raised during Wen’s rare state visit.

Kim’s latest comments represent the clearest indication to date of the North’s intentions to return to the six-party talks. Kim has previously hinted at willingness to engage in multilateral dialogue but this was the first time he specifically mentioned the six-party setting.

The denuclearization talks, which involve the two Koreas, the United States, Russia, Japan and China, have been on hold since last December. In April, North Korea announced it would never return to the six-party talks and later declared the talks “dead.” In the meantime, the North conducted its second nuclear test and also often accused the six-party setting of “infringing upon the sovereignty of North Korea” by seeking to force the North to dismantle its nuclear program.

North Korea has alternated between a moderate stance and a belligerent tone in the latter half of the year. It released detained American and South Korean citizens and lifted border restrictions for South Koreans. The North also sent a special delegation to the funeral of the late South Korean former President Kim Dae-jung.

On the other hand, in early September, the North sent a letter to the United Nations Security Council saying that its uranium enrichment program for nuclear weapons development had entered its final phase and that it was making more weapons from extracted plutonium.

Speaking at the UN General Assembly late last month, Pak Kil-yon, North Korea’s vice foreign minister, urged the United States to change its “hostile” policy on North Korea. He said at the time that Pyongyang had no choice but to rely on its nuclear arms to deter U.S. nuclear threats and to ensure a nuclear balance in Northeast Asia.

The North Korean media’s reports about Kim’s willingness to return to the multilateral talks including the six-party nuclear negotiations came at a sensitive time as leaders of South Korea, China and Japan will gather later this week to address the nuclear issue. President Lee Myung-bak and Japanese Prime Minister Yukio Hatoyama will be personally briefed by Chinese Premier Wen about his meeting with Kim during the annual trilateral summit in Beijing on Sunday.

The Blue House did not issue an official position yesterday on Kim’s remarks. “Governments of North Korea and China have not made official announcements, so it is not yet time for the South Korean government to comment on the issue,” said Blue House spokesman Park Sun-kyoo.

Other aides in charge of foreign and security affairs reacted with restraint.

“We do not have enough information at this point to say whether Kim’s remarks are positive or negative” said Kim Tae-hyo, Lee’s secretary for national strategy who has been handling the North’s nuclear issues.

“The five countries of the six-party talks will continue efforts to persuade North Korea to return to the negotiation table. At the same time, we will continue to implement sanctions,” Kim said, adding that “the ball is still in North Korea’s court.”

The U.S. State Department took note of the reports and said it was waiting for more detailed results of the meeting. Spokesman Ian Kelly called the six-party process “the best mechanism for achieving denuclearization” of the Korean Peninsula.

“We, of course, encourage any kind of dialogue that would help us lead to our ultimate goal that’s shared by all the partners in the six-party talks, which is the complete and verifiable denuclearization of the Korean Peninsula,” Kelly said. “The U.S. remains willing to engage North Korea bilaterally within the framework of the six-party process to convince North Korea to take the path of complete denuclearization.” South Korean analysts said the North is essentially pressuring the United States to quickly hold a bilateral meeting. Kelly said yesterday no decisions had been made about a possible trip to Pyongyang by Stephen Bosworth, the U.S. special representative for North Korea policy.

“Though it came with some strings attached, that Kim Jong-il mentioned six-party talks is quite significant,” said Kim Yong-hyun, professor of North Korean studies at Dongguk University in Seoul. “The North has also put pressure on the United States to quickly set up bilateral talks. I think an October meeting is a distinct possibility. The six-party talks could be held in November.”

“The comments were meant to save face for China, the chair nation of the six-party talks,” Yoo said. “Under such conditions, the six-party talks, even if they were held, would merely be a stage for the North to go over whatever was discussed at its bilateral meeting with the United States.”

The United States has made it clear that it will keep pressure on North Korea by way of sanctions. Kelly said yesterday the country was “committed to the full implementation” of UN Security Council resolutions that impose punitive measures on Pyongyang following this year’s nuclear and missile tests.