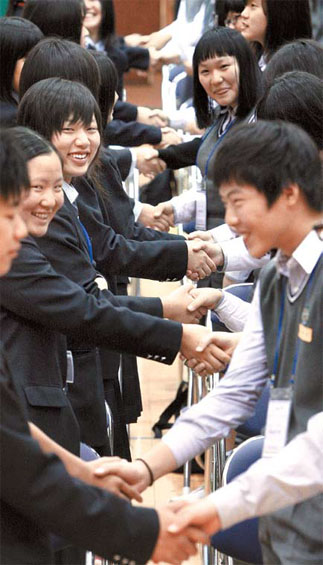 Korean students, right, at Yongma Middle School in Seoul welcome about 50 Japanese students, left, from Niigata Prefecture before they attend a joint class. The Japanese students came to Korea in an cultural exchange program organized by the National Institute of International Education. [YONHAP]


In an unprecedented gesture, Japanese Foreign Minister Katsuya Okada called for a common history book for South Korea, China and Japan to form a shared recognition of the history in the East Asian countries.

Speaking at the Foreign Correspondents’ Club of Japan late Wednesday, Okada said it would be “ideal” if the three neighboring nations published a common history book to clear up controversies over the interpretation of historical regional events.

“Ideally, we need to have a common history textbook,” Okada said. “As a first step toward the publication of the common textbook, the three countries should implement a joint study of the history.”

It marked the first time that an acting Japanese government official has discussed the possibility of publishing a history textbook of that kind.

Japanese history texts have been criticized for containing distorted facts about Japan’s imperialist past and for playing down Japan’s atrocities during World War II. The books have in particular upset many in South Korea and China.

Okada acknowledged that some people have yet to accept the Japanese apology from 1995, issued in a statement released by the then-Prime Minister Tomiichi Murayama. On the 50th anniversary of the end of World War II, Murayama expressed his “feelings of deep remorse and .?.?. my heartfelt apology” for causing “tremendous damage and suffering to the people of many countries, particularly those of Asian nations” through its colonial rule, according to the English-language statement on the Web site of the Japanese Foreign Ministry. Murayama also urged Japan to “eliminate self-righteous nationalism.”

Though other Japanese officials have apologized at various times, Okada said Wednesday that it is “time to take action.”

South Korean officials and academics have said the new leadership of the Democratic Party of Japan, which ousted the Liberal Democratic Party in a lopsided election victory in August, would be willing to change Japan’s position on historical issues between Japan and South Korea.

Hatoyama has already said he will not visit the Yasukuni Shrine in Tokyo, a contentious memorial for Japanese war dead, including some convicted war criminals. He has pledged to honor Murayama’s apologetic statement.

In an interview with Korean journalists last month, Okada said both he and Hatoyama believe Japan “needed to have the courage to face our history.”