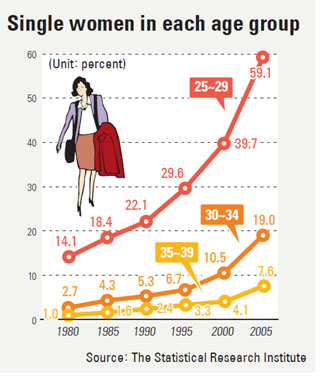 Korean women over a certain age who are unmarried have long been subjected to negative comments from co-workers and relatives for not settling down.

Now they face another challenge: bearing the responsibility for the nation’s plunging low fertility rate.

In 2008, the fertility rate for Korea was 1.19, according the National Statistical Office.

According to the Statistical Research Institute, the nation’s statistical research agency, this record low fertility rate stems largely from the falling numbers of women in urban areas getting married.

The report, which had no comparable statistics for single men, was prepared by institute for the years 2000 to 2005.

It was titled “Korea’s reproduction capability analysis” and stresses how the declining marriage rate among urban women is as serious a social problem for the country as the one facing Korean men in rural areas unable to find brides.

A growing number of local farmers have married women from the Philippines, Vietnam, Cambodia and elsewhere in Asia because fewer Korean women want to live the life of a farmer these days.

According to the agency’s report yesterday, the average fertility rate for married women in Korea’s rural county areas was 2.35 in 2005, followed by 1.89 in mid- and small-sized cities and 1.83 in big, urban cities.

The reluctance - or perhaps inability - to get married was particularly conspicuous in urban areas.

Gangnam District in southern Seoul and the Jung districts in Daegu and Busan had the highest portion of single women in their female populations.

In Seoul, 12.5 percent of women aged 35 to 39 are single, drawing a stark contrast to the past when most women of that age had at least one child or more in elementary school.