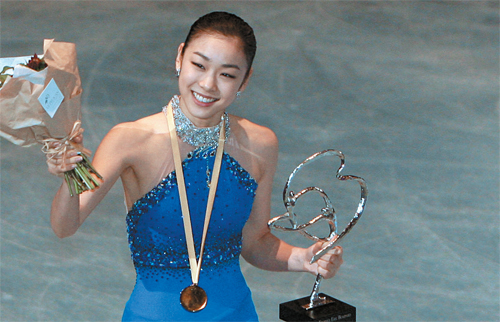 Kim Yu-na smiles to the crowd after placing first at the Trophee Eric Bompard in Paris, France early yesterday. Kim earned her sixth consecutive Grand Prix title with a world record combined score of 210.03 and also set a record in the free skate program with 133.95. [YONHAP]

Over the weekend, Kim bagged her sixth Grand Prix title and in the process set a record in new combined score of 210.03 at the Trophee Eric Bompard competition in Paris, topping her previous best of 207.71, which she set at the World Championships in March. In the first of six 2009-10 ISU Grand Prix of Figure Skating events, Kim also set a new world record in the free skating program with a score of 133.95.

With the 2010 Vancouver Winter Olympics coming up in February, the 19-year-old is in peak form. The latest title is her sixth consecutive since her first Grand Prix win at Trophee Eric Bompard in 2006. Kim overwhelmed her competition with a strong performance which included a triple lutz-toe loop combination to start her free skate program, performed to George Gershwin’s Piano Concerto in F major. Although Kim could not get off her triple flip jump, she drew loud cheers from the audience for her flying sit spin and spiral sequence.

“Leading into the triple flip jump, it felt as if there was something caught in my blade and I momentarily lost my balance. However, I feel very satisfied about finishing the rest of my program and feel very happy about earning the highest score,” Kim said on Saturday.

“Looking at the free skate program ... I was surprised when I saw a score of 210 flash across the scoreboard. Scoring the highest total at the season opener, I felt numb for a moment.”

As the first competition since her record setting World Championships performance in March, a lot of attention had been paid to Kim leading up to the French Grand Prix. Showing an impressive performance over the weekend, Kim will have to focus on the next competition, Skate America in Lake Placid, New York, next month.

Not only do the Grand Prix series events help to prepare Kim for the Winter Olympics, but the top six skaters from the six events get the opportunity to compete in the Grand Prix Final in Tokyo in December.

“I think I’m getting more attention because the Olympics are coming up. I have been eagerly anticipating the Vancouver Winter Games and therefore I am a little nervous. Having gathered good results in two consecutive seasons, my confidence is building,” said Kim.