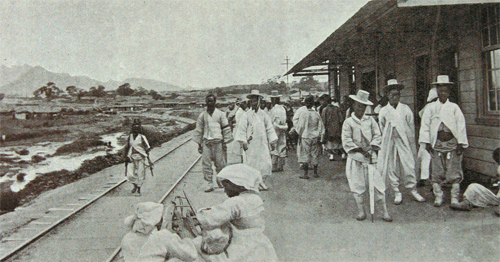 Korea’s 110-year railroad history by the numbers
9/18/1899 - date that Korea’s first railway, called the Gyeongin Line, opened
90 jeon (the old Korean currency) - the ticket price for a first-class seat (to put it in perspective, a bowl of noodles cost 3 jeon back then).
30 km/hour - the speed at which Korea’s first train, the Mogal, operated.
2004 - Year in which Korea opened its high-speed railway, the fifth country in the world to do so.
300 km/hour - the speed at which Korea’s high-speed railway operates today.


Public transportation is one of those rare inventions that changed life forever.

Long gone are the days when people had to walk, ride horses or - for the regal bunch - sit atop palanquins to get around. Today, you can hop in a car, a bus or a subway and speed across town in a jiffy. You can also fly to the other side of the world in less than a day. 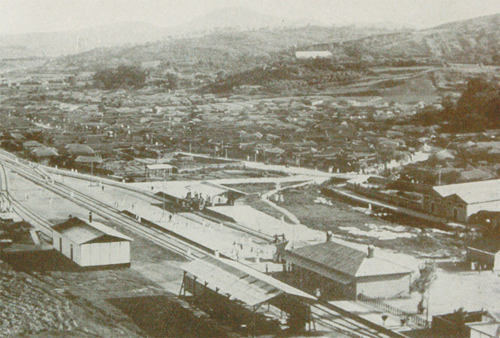 Seodaemun Station, pictured above, once stood near Ewha Girls’ High School in Jeong-dong. It functioned as the main gateway to Seoul for Koreans, as pictured above, until it was demolished around 1919. Provided by Myongji University-LG Yeonam Library

For moving across Korea, however, cars, planes and buses often take a back seat to trains today. Sure, riding the rails might not be as popular as it was back in the day. But taking the train can be far more efficient when it comes to zipping around the country, particularly when talking about the relatively new high-speed lines.
Last month, Korea celebrated the 110th anniversary of the foundation of its first railroad. So what better time than now to look back at the first major railway and train stations in Korea, a tale that highlights tremendous advancement and architectural treasures, yet one that also has a decidedly dark side.

Few, if any, people these days marvel at the idea of riding a train. But in the mid-1800s, it was quite exciting. 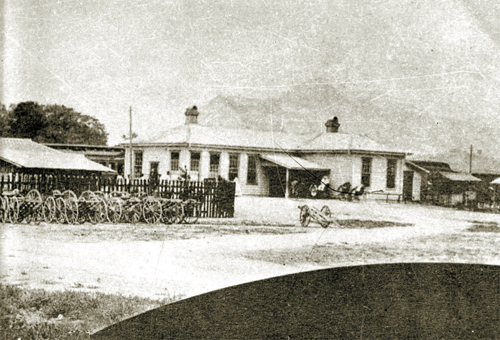 Namdaemun Station (above) was the precursor of Seoul Station. Provided by Myongji University-LG Yeonam Library

“It darts like thunder and lightning and leaps like wind and rain,” Kim Ki-su, a foreign envoy, wrote in 1877 about his experience riding a train a year earlier in Japan. “Inside the car it doesn’t move a bit, but outside scenes of mountains, houses and people flashed fast.”

Historic documents show that the Korean government actively began discussing construction of a railroad in 1882, hoping to introduce this amazing new “steel horse” to the people. But the government, part of the Joseon Dynasty (1392-1910), was growing increasingly weak and vulnerable due to rising pressure from Japan and other countries. Eventually, foreign powers struggled with each other over the right to build the railroad here. This context is key to understanding the history of Korea’s railroad system.

“A railway is a symbol of a modern society, and its construction signals the start of a modernization process,” Kim Jong-hun, an architecture professor at Pai Chai University, argued in his book “The History of Stations,” released in 2003. “But Korea’s case is unique because a railway didn’t appear when the people felt the need for it. Rather, it was Japan’s means of invading the country.”

The project fell into Japanese hands in a roundabout way.

American financier James R. Morse actually obtained the construction rights for Korea’s first railroad, which was dubbed the Gyeongin Line. The plan was to connect Jemulpo in Incheon with Noryangjin in Seoul. Morse held a groundbreaking ceremony in 1897 in Incheon. But his financial situation rapidly deteriorated, and he conceded the rights to a Japanese firm two years later.

The Japanese opened the Jemulpo-Noryangjin line on Sept. 18. About 10 months later, after a bridge over the Han River was completed, the line was extended, stretching all the way to the Jeong-dong area.

While the railway was no doubt a solid achievement, it came at a price. 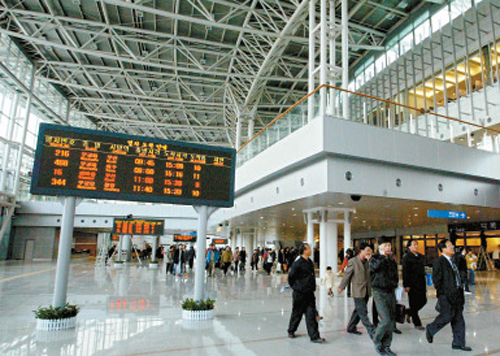 Seoul Station has long been one of the busiest train stations in the city.

The Japanese forcibly mobilized thousands of Korean workers, bought a massive lot at a dirt-cheap price and bulldozed farms, homes and even graveyards, according to a March 9, 1906 article in the Daehan Maeil Shinbo, an early Korean newspaper.

The opening ceremony for the extended line was held at Seodaemun Station, which once stood near Ewha Girls’ High School in Jeong-dong and became the “gateway to Seoul.” The station is believed to have been demolished sometime around 1919, relinquishing its gateway status to Namdaemun Station, precursor of today’s Seoul Station (Seodaemun and Namdaemun stations had coexisted for two decades).

Henry Noel Humphreys (1810-1879), a British artist, argued that it is the duty of railways and train stations to relieve travellers, in part by having a comforting architectural style. That wasn’t the case in Korea, though, where early railway stations were barely more than Japanese military facilities. Not exactly soothing.

Stations built later can be lumped into one of three architectural types: classical Western, traditional Japanese and a mix of the two. The old Seoul Station building, which is currently undergoing restoration, falls into the third category. It was built between 1922 and 1925 to replace the small, wooden Namdaemun Station. Today, of course, the new Seoul Station has a modern feel.

While the history of railways and the train stations themselves in some countries are more glamorous, Korea at least has a unique background in this area.

The start of the railway system here, as Professor Kim of Pai Chai University says, was “the byproduct of clashes between invasion and resistance, development and plunder, and repression and growth.”