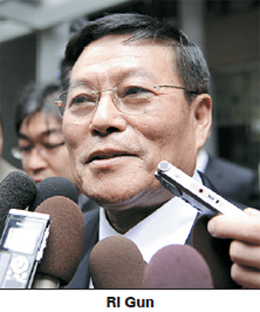 The statement said the meeting took place in New York and added Kim took the opportunity “to convey our position on denuclearization and the six-party talks.” No further details of their one-hour talk were available.

After emerging from the meeting, Ri told reporters, “I met with Sung Kim and discussed issues of mutual interest.” Ri, who is also director general of American affairs at Pyongyang’s Foreign Ministry, is in the United States to attend a forum called the Northeast Asia Cooperative Dialogue in San Diego, California, starting this week. He was in New York for seminars, and he is to return to New York Friday for more seminars set up by the Korea Society and the National Committee on American Foreign Policy.

The Ri-Kim talks came as North Korea continues to seek a direct, exclusive meeting with the United States. North Korean leader Kim Jong-il said earlier this month that the North would be willing to return to the six-party talks depending on the progress made at the Pyongyang-Washington bilateral meeting. The six-party dialogue, which involves the two Koreas, the United States, Russia, Japan and China, has been stalled since last December. The North declared it would never return to the six-party table and called the framework “dead.” It followed by conducting its second nuclear test and has test-fired a barrage of missiles in defiance of the international community. The United States, which doesn’t have diplomatic ties with Pyongyang, still hasn’t decided on the time and place for its meeting with North Korea. The two sides have other differences.

The North wants to deal with the nuclear issue one-on-one with the United States. But Washington considers any possible bilateral meeting a chance to persuade the North to return to the six-party table and has insisted that any nuclear discussions must be carried out within the multilateral setting. Kurt Campbell, the U.S. assistant secretary of state for East Asian and Pacific affairs, last week became the latest American official to claim that Washington would not sit down with Pyongyang unless the meeting helped resume the six-party talks.

“We would be prepared for, in the right circumstances at some point, some initial interaction [with North Korea] that would lead rapidly to a six-party framework,” he told a think tank forum in Washington. He also said “patience and caution” were necessary in taking up the North’s call for the bilateral meeting.

Even as it mulls over a possible meeting, the United States has said it has no intention of easing restrictions on North Korea just to secure that country’s return to the nuclear talks.