GDP growth fastest in past 7 years

GDP growth fastest in past 7 years 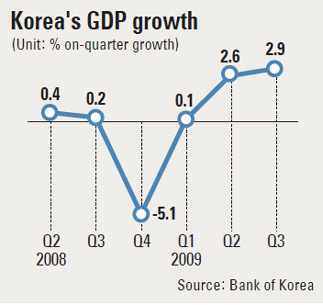 Korea’s economy grew at the fastest pace in seven and a half years in the July-September period over the previous quarter, beating expectations. The economy’s on-year growth also came into positive territory for the first time in a year.

The Bank of Korea said in a statement yesterday the nation’s gross domestic product expanded 2.9 percent in the third quarter from the second quarter, when it increased 2.6 percent. Year-on-year, the GDP climbed 0.6 percent.

“Now the private sector is showing the potential to recover on its own,” Kim Myung-kee, director general of the BOK’s economic statistics division, told reporters. He pointed out that private consumption and companies’ investment in facilities accounted for 0.8 and 0.7 percentage point, respectively, of the third-quarter growth, while government spending contributed a minus 0.1 percentage point.

“However, an economic recovery perceived by ordinary consumers could be weaker than the GDP growth indicates, because the biggest reason behind the faster-than-expected growth was slowing of inventory adjustments,” Kim said.

In the aftermath of the global financial crisis, local companies drastically reduced inventories by cutting their production in the fourth quarter of last year and the first quarter of this year, bringing about a sharp decline in economic growth. Now, as the conditions of their export markets are improving faster than expected, they are decelerating inventory cuts, the central bank explained.

Kim said fourth-quarter growth would be lower than the third quarter, due to the fade-out of the effects of inventory change. But even if the on-quarter growth of GDP in the October-December period is zero percent, its on-year growth will reach 5.8 percent and the annual growth of 2009 will be in positive territory, he said.

Yoon Jong-won, head of the Finance Ministry’s economic policy division, also said in an interview with Yonhap yesterday, “The Korean economy could mark a positive growth this year .?.?. Fourth-quarter growth would not be so strong as the third-quarter growth, but if the economy achieves 1 percent growth in the fourth quarter, which is the government’s target, the annual growth would be above zero.”

The Korean government’s latest official forecast for this year’s GDP growth is minus 1.5 percent.

On financial markets, interest rates climbed sharply yesterday in expectation that the central bank might raise the key rate soon because of the better-than-expected economic data.