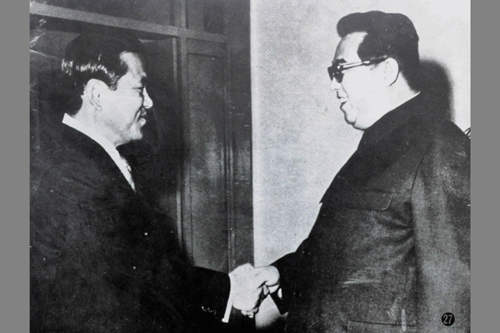 Lee Hu-rak, former head of South Korea’s central intelligence agency known for his 1972 secret trip to North Korea for a historic inter-Korean agreement, died Saturday of age-related causes, his family said. He was 85.

Lee, the right-hand man of late former President Park Chung Hee, served as chief of staff for six years from 1963 until 1969, and served as director of the Korea Central Intelligence Agency between 1970 and 1973. He was notorious for oppressing dissidents opposed to Park’s iron-fisted rule. Park seized power through a coup in 1961 and ruled the country until 1979 when he was assassinated by another close confidant, Kim Jae-kyu, head of the Korea Central Intelligence Agency at the time.

Lee secretly traveled to Pyongyang in 1972 to pave the way for a landmark inter-Korean agreement on the principles for reunification called the “July 4 South-North Joint Communique.”

Lee was elected to parliament in 1979 but was prohibited from political activity the following year because of corruption charges. He was freed from the restrictions in 1985, but stayed in seclusion.

Lee was suspected of masterminding the kidnapping of Kim Dae-jung, a dissident leader at the time who later became Korea’s president. Kim Dae-jung was kidnapped on Aug. 8, 1973, from a hotel in Tokyo, Japan, and released in Seoul five days later. In 1988, the U.S. National Security Archive revealed a 1973 confidential diplomatic document that said Lee Hu-rak masterminded the kidnapping. The historical truth of the incident may never be fully known as Lee died without disclosing details.

While floral wreaths sent by politicians and dignitaries were displayed at the altar, those who had known him in person continued to make visits to offer tributes to Lee.

But most of politicians and dignitaries who sent wreaths did not visit the altar.

With Lee’s death, all the heads of the Korea Central Intelligence Agency, the most powerful position under the Park Chung Hee regime, have disappeared into history.

Lee Hu-rak is survived by three sons and a daughter. His funeral will take place today at 8:30 a.m. Lee will be buried in the National Cemetery in Daejeon.