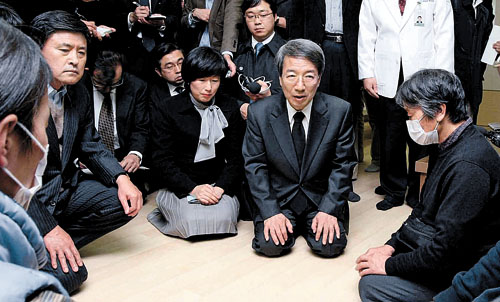 At Yangsan Hospital in Busan yesterday, Prime Minister Chung Un-chan, kneeling second from right, consoles grieving relatives of the Japanese tourists who died in a fire on Saturday at an indoor shooting range in Busan. By Song Bong-geun

The Korean government yesterday was scrambling to lend support to families of the Japanese victims who were killed in a fire at an indoor shooting range in Busan, a southern port city, Saturday.

Eight Japanese tourists were among 10 victims of the fire that left six others in critical condition. According to police in Busan, the blaze broke out at 2:26 p.m. and was put out about 40 minutes later. Most of the victims reportedly died from severe burns and toxic smoke inhalation. The indoor range was located on the second floor of a five-story building.

Authorities were still investigating the exact cause of the blaze. They suspect that the fire may have started in a second-floor lounge next to the range, and that the tourists were trapped inside the range as the fire swept through the building. The Japanese victims had arrived in Busan earlier Saturday to begin a two-day trip.

According to Kyodo News, Hatoyama asked for Lee’s cooperation to ensure safety for Japanese tourists in indoor shooting ranges across Korea. The National Emergency Management Agency has set up a special task force to conduct an investigation into the incident and to prepare measures to prevent recurrences of similar fires.

Shin Kak-soo, the first vice minister of Foreign Affairs and Trade, expressed his condolences for the victims to Toshinori Shigeie, the Japanese ambassador to Seoul. The Foreign Ministry has also set up a special unit to handle the situation. An official said the ministry’s bureau of consular affairs is tasked with the protection of foreign citizens in Korea.

The Korean Embassy in Japan will assist the families of the victims with their trip to Busan, while ministry headquarters in Seoul will maintain communication with the Japanese Consulate General in Busan, the official explained.

Japanese media were critical of the lax safety measures at the shooting range where the fire occurred. The Asahi Shimbun noted that opening an indoor shooting range in Korea requires strict standards for firearm safety and soundproofing, but that fire prevention tends to take a backseat.

The Yomiuri Shimbun reported that the burned-down Busan range had no windows and only two exits. It quoted an Osaka man who had visited the range in the past as saying, “It was such a closed-off place that it would have been difficult to escape if there had been a fire.”

Signs at the facility are written in Japanese and several staff members are fluent in the language. In April 2006, three Japanese tourists suffered burns in a fire at a Seoul indoor shooting range.