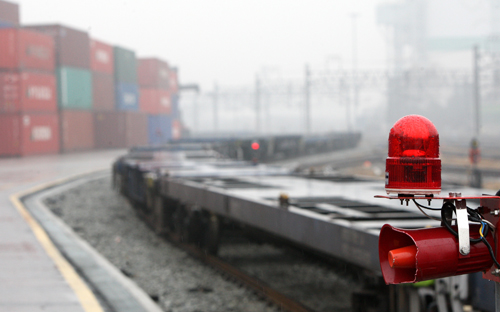 Many empty freight train cars were grounded yesterday at Obong Station in Uiwang, Gyeonggi, where an inland container depot is located as railway workers continued a general strike for the fourth day. [YONHAP]

During the fourth day of the Korean Railway Workers’ Union’s strike yesterday, passenger train operations were disrupted after the Korea Railroad Corporation assigned some workers operating those trains to instead operate ones hauling cargo. Cargo train operations partially improved.

“It is so absurd that trains cannot be in operation. I came to Seoul to meet my family and parents during the weekend but I cannot go back to Busan to work,” said Jeon Seok-ju, who had earlier purchased a Saemaeul train ticket for 7:20 p.m. Like Jeon, there were some 4,000 other passengers who had to cancel trips.

Problems dealing with cargo congestion at Inland Container Depot in Uiwang, Gyeonggi, were resolved partially as Korail utilized 68 extra cargo trains during the weekend to transport some 650 containers to ports in Busan and Gwangyang, South Jeolla.

“Many emergency workers are getting tired. We have no choice but to give them breaks beginning early this week and the number of workers will decrease even more,” said an official at Korail who asked not to be named.

The Ministry of Land, Transport and Maritime Affairs is planning to urge passengers to take either expressways or cross-country buses.

The ministry will also lend cargo trucks to shippers to use for emergency transportation. The strike cost Korail 3.7 billion won ($3.1 million) from Thursday to Saturday. “We will use this opportunity to correct the union’s habitual custom of going on strikes and its irrational system,” Korail CEO Huh Joon-young said. “We are going to also ask for deep understanding from people who had to suffer inconvenience due to the strike.” Huh stressed that there will be no negotiations unless the union ends its strike. The union showed no signs of doing that.

“In a situation where a number of young job seekers are in pain getting jobs, people cannot understand and they will not understand the illegal strike caused by a public firm’s union workers whose employment period is guaranteed. Compromises should not be made with the strikers,” Blue House spokeswoman Kim Eun-hye quoted President Lee Myung-bak as saying on Saturday.