How is Korea helping poor nations across the world?

How is Korea helping poor nations across the world?

Korea now has more obligations to developing countries and will feel more pressure to help.


With the holidays quickly approaching, many teens are eagerly awaiting the day they can rip open holidays gifts and dig deep into stockings.

But the Christmas season is usually a time when giving - not just receiving - takes center stage as well. And we’re not just talking presents to family members and friends.

Have you ever donated money to help poor people or put some won into one of the Salvation Army tins on the streets this time of year? These are just some of the ways that locals help others over the holidays and throughout the year, for that matter.

When it comes to giving, countries are no different.

Although international aid takes place on a much larger scale and encompasses many different forms, the idea is the same: Help those who are less fortunate.

In today’s world, richer countries often feel an obligation to help relatively poor countries that are suffering from extreme poverty, internal strife and other ailments. But humanitarian aid - also dubbed official development assistance, or ODA - is not offered purely out of compassion. Helping poor countries ease conflict and escape from poverty is an urgent task for society in general, as it will make the world safer. 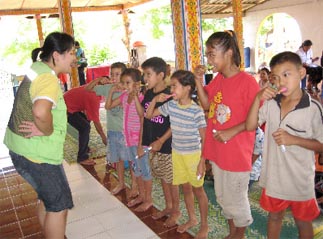 A Korea International Cooperation Agency aid worker teaches children in Laos how to properly brush their teeth - part of a program aimed at tackling the nation’s chronic dental problems - while their parents get free medical checkups from Korean volunteer doctors in August 2008. By Jung Ha-won

This idea is what experts often call “enlightened self-interest.” It means that richer countries face the daunting task of preventing the ailments that poor countries face, like poverty, violence and even terrorism, from expanding outside their borders and posing threats to other parts of the world. They do this by filtering money into a variety of efforts in other countries, everything from building railroads and airports to providing food for the needy and funding hospitals.

Korea has been relatively stingy in pumping time and money into international aid, despite the fact that its rapid economic ascension was fueled by aid from others. 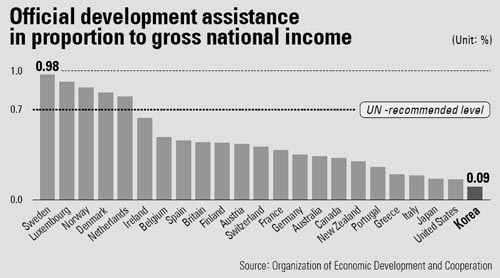 The country - which was one of the biggest beneficiaries of international aid in the wake of the Korean War (1950-53) - provided about $800 million in ODA last year, which amounts to 0.09 percent of the nation’s gross national income. That might sound like a lot, until you put it in perspective. The figure is pitifully below the UN-recommended 0.7 percent and far lower than the 0.35 percent average among nations that are members of the Organization of Economic Development and Cooperation.

But there is a growing flicker of hope that this will change.

Korea is stepping up efforts to increase its international aid in line with its rising economic and political might in the international community.

The country recently joined the Development Assistance Committee, an OECD forum for selected member countries that are dedicated to aid, development and poverty reduction in developing countries. The committee, which prides itself as the main international aid body among the world’s major donor countries, has accepted Korea as its 24th member. Korea will officially enter the fold on Jan. 1, becoming the first ODA beneficiary country to join the group.

The move is expected to bring about major changes in Korea’s international aid practices, given that the committee’s members are responsible for nearly 90 percent of global aid. Other nations in the group include the 1961 founding members - Belgium, Canada, France, Germany, Italy, Japan, the Netherlands, Portugal, Britain and the United States - as well as Norway, Denmark, Sweden, Austria, Australia, Switzerland, New Zealand, Finland, Ireland, Spain, Luxembourg and Greece.

Many committee members hailed Korea’s entrance into the club as an exemplary event that offers hope to many developing countries aspiring to move up on the world stage. As Eckhard Deutscher, chair of the DAC, put it, “The change in Korea’s status sets an example for current aid beneficiary countries to follow.”

But joining the echelon of the major donor countries is no red carpet ride. It means that Korea now has more obligations to developing countries, and it will feel more pressure to help out. All DAC member countries must offer either developmental aid that totals at least $100 million a year or 0.2 percent of the country’s gross national income.

Korea has been providing annual developmental aid worth more than $100 million since 1993, but it has some ground to make up in numerous other areas.

The quality of aid it offers, for instance, lags behind other donor countries. The assistance a country provides is lumped into two groups: free grants and concessional loans. The DAC suggests that member countries provide more free grants than loans, which have to be paid back. More than 40 percent of the aid Korea provides is in the form of loans, which include numerous provisions and prerequisites. Many other DAC countries provide just 10 percent or 20 percent of their aid in the form of loans.

Korea’s Foreign Ministry is now working on increasing the volume of grants over loans.

The government is also planning to lift its aid-to-gross national income ratio from the current 0.09 percent to 0.15 percent in 2012 and 0.25 percent by 2015. That’s a huge increase, one that would translate into total annual ODA of about $3 billion.

The world doesn’t have much of a history in this area. Overseas development aid dates back to post-World War II, when countries started to chip in to compensate countries that were ravaged by war. It kicked into full gear when the United States pumped nearly $13 billion in economic and technical assistance to help European countries after World War II.

Such massive development aid projects ebbed after the Cold War ended in the 1990s. But the Sept. 11, 2001 terrorist attacks helped change the perception among the public and governments, which began to realize that reducing poverty in developing countries is vital to security across the world. As a result, the world’s ODA contribution exceeded $100 billion for the first time in 2005, and the levels did not abate even during the latest economic crisis. In fact, most DAC member countries pledged to increase their aid contributions for 2009.

As of 2008, the United States ranks as the biggest donor, with annual ODA of $26 billion, followed by Germany ($13.9 billion), Britain ($11.4 billion), France ($10.9 billion) and Japan ($9.3 billion). In terms of aid contributions in proportion to gross national income, though, Sweden is the most generous donor with a ratio of 0.98 percent, followed by Luxembourg at 0.92 percent and Norway at 0.88 percent.

The major beneficiary countries are in Africa and Asia. A large portion of aid for African countries comes from Europe, while Japan, Australia and New Zealand send most of their aid to neighboring Asian countries. Korea also gives a large portion of its aid to Asia’s developing countries, but the government said it plans to expand it to countries like Afghanistan and countries in the sub-Saharan region like Ethiopia and Tanzania.