The biggest snowfall in almost a century nearly paralyzed Seoul’s transportation system yesterday, the first official business day of the new year. As of 1:30 p.m., 25.7 centimeters (10.1 inches) had fallen in Seoul, replacing the previous high of 25.6 centimeters on Jan. 28, 1969. The Korea Meteorological Administration said yesterday’s snowfall can be considered a historic high given that the nation began compiling snow data in 1937.

The unprecedented snowfall later stretched to Gyeonggi as well as the Gangwon, Chungcheong and Gyeongsang provinces, disrupting road and air traffic. It took hours longer for subway commuters to arrive at work after passengers crowded onto the transportation system considered least affected by the snow. 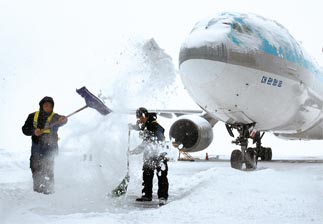 Workers wipe snow off a plane at Gimpo International Airport, which canceled all flights in the morning. Flights resumed later in the afternoon. [YONHAP]

Kim A-ram, a 30-year-old worker at a media firm, said he spent one hour yesterday morning trying to get to Gwangnaru Station in eastern Seoul from his home in Guri on the outskirts of Seoul by bus, although the route was supposed to take only 10 minutes.

“Because the buses were so jammed with passengers, I had to let two buses go by before eventually cramming onto the third,” he said.

Personal vehicles on city roads were sparse. But those brave enough to drive in central Seoul area had to progress at a turtle’s pace. Some cars attempting to climb a slope found themselves stuck in the muck.

Until 1:05 p.m. all flights were canceled at Gimpo International Airport - an event that had not happened since January 2001. The airport later partially resumed operations of both arriving and departing flights.

Although Incheon International Airport did not undergo massive flight cancellations, dozens of flights were delayed. The majority of departing flights that were canceled were bound for China, which also suffered heavy snowfall. Korea’s airport authority advised that those planning to fly check with airport call centers or respective airlines in advance.

A few ministers failed to arrive on time at the second Cabinet meeting of the year at the Blue House due to weather. President Lee Myung-bak said, “We need to understand them because we are in an unprecedented situation.” The Blue House called off a New Year’s commencement ceremony scheduled for 3 p.m. The Ministry of Public Administration and Security announced that civil servants who were late yesterday won’t be noted as tardy, dubbing the situation a “natural calamity.”

The Seoul Metropolitan Government established emergency measures “to minimize citizens’ inconvenience from the abrupt snow.” It designated 7 a.m. to 11 a.m. as “rush hour” in consideration of commuters, raising the frequency of trains to three minutes. Normally, rush hour stretches from 7 a.m. to 9 a.m. and trains run every five to 12 minutes after that.

Subway trains were not always reliable. A train running on line No. 1 briefly broke down at 7:40 a.m., leading to a 15-minute suspension on the route between Namyeong and Yongsan. The subway linking Seoul and Bundang, a satellite city in Gyeonggi Province, also was delayed because the outdoor station of Bojeong was buried with snow.

The meteorological office and the government were faced with outcries from citizens against their failure to predict and prepare for the storm. The office on Sunday, only a day earlier, forecast that the Seoul and Gyeonggi area would see 10 centimeters of snow at the most. Yesterday, it explained that the abrupt snow came after the cold air in the middle of the peninsula met wet air from southwest. It predicted around 3 centimeters of snow would fall later in the day and that the temperature would drop as low as minus 12 degrees Celsius (10.4 degrees Fahrenheit) today.

“Although it’s been a long time since I have lost my faith in the Korea Meteorological Office, I still can’t understand how this metropolitan city can lapse into such a paralyzed state after only hours of snowfall,” said Rei Choi, a 34-year-old trading company worker. “Not only government offices but also private companies should allow for tardy commuters given the situation,” she added.

Some citizens opted for enjoying the unparalleled moment. A man in his 40s was spotted skiing in Gwanghwamun, central Seoul, while a photo of a different man in sports gear skiing in Cheongdam-dong, southern Seoul, circulated across the nation’s cyberspace.

Lim Jeong-jin, an employee at a financial enterprise, says she is far from being frustrated from the snow. “I have never seen such a large amount of snow in my life. It’s a unique experience that I may never have again. I won’t be bothered by traffic disruptions,” she said.