Why is the U.A.E. nuclear plant deal so important?

Why is the U.A.E. nuclear plant deal so important?

This photo shows Shingori nuclear power plants 1 and 2 are under construction using the Korean standard OPR-1000 design. The design that Korea will use in its project in the U.A.E., the APR-1400, is a larger, improved version of the Shingori power plants. [JoongAng Ilbo]

Korea now has some of the world’s most efficient, cutting-edge plant designs.

It might seem strange for a bunch of nuclear power plants in the United Arab Emirates that aren’t even built yet to be all over the evening news in Korea, but that’s exactly what happened last month.

This country’s first export of nuclear power plant technology is significant considering South Korea’s short history. But it also indicates its advanced capabilities and how it can compete with leading countries.

The world’s nuclear power plant market had been a competition among only five countries: the United States, France, Japan, Russia and Canada.

By company, Westinghouse has the biggest market share, around 28 percent, followed by France’s Areva at 24 percent and GE with 20 percent, then Russia’s AEP with 10 percent and Canada’s AECL with 5 percent.

With the U.A.E. order, Korea is now among the leaders. But another reason for all the hoopla is the prospect of future growth. The World Nuclear Association has forecast that 430 additional nuclear plants will be built by 2030, and 1,400 between now and 2050. There are now 432 nuclear plants operating in the world.

The world’s focus on nuclear power has come largely due to spreading concerns over the environmental damage caused by greenhouse gas emissions and the growing expense of fossil fuels. 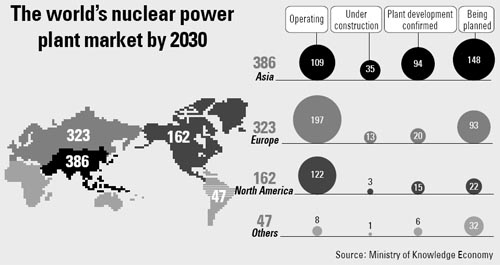 Unlike thermoelectric power plants which generate carbon dioxide, the leading contributor to global warming, nuclear power plants generate energy through nuclear fission, which is environmentally friendly as long as the radiation produced is contained. The only emissions involved come from the delivery of the uranium fuel and the water vapor produced by the turbines.

Of course there are other alternative power sources that are emission-free. Mainly, the world is now looking into renewable energy, including solar and wind power.

However, though those technologies have made significant progress in recent years, they are still far from commercialization across the globe. For now, the only carbon-free option widely available on a large scale is still nuclear power.

Adding to nuclear power’s attractiveness is its low cost. According to the Korean government, last year the average unit price for a single kilowatt generated from nuclear power was 38 won (3 cents). In contrast, a kilowatt of energy from oil cost 117 won, while liquefied natural gas clocked in at 104 won and wind at 107 won. A solar kilowatt cost the most at 677 won.

Another strong selling point for nuclear power is the abundance of uranium as fossil fuel supplies dry up. According to the Nuclear Energy Agency under the Organization of Economic Cooperation and Development, the world has sufficient uranium reserves to last 240 years. If nuclear power plants grow more efficient, the group estimated that the reserves could cover more than 1,000 years.

But the world was not always so optimistic about nuclear power. Development came to an almost total halt after the horrific accident at Chernobyl in Ukraine in 1986. In 1990, there were 426 nuclear power plants in the world. The number only nudged up to 430 in the next 10 years.

But with new advances in safety and efficiency, the race is back on, with 52 nuclear power plants now under construction.

So where does Korea stand? Korea today has 20 nuclear power plants up and running, and it is currently building eight more. Those 20 reactors supply nearly 40 percent of the nation’s electricity, and the government is planning to increase its nuclear capacity by 56 percent to 27.3 gigawatts by 2020.

Korea joined the International Atomic Energy Agency in 1957, and a year later it passed the Atomic Energy Law, opening a government office in 1959.

It took 10 years for Korea’s first nuclear power plant, the Gori-1, to start operations. However, it was not until the mid-1980s that Korea’s nuclear power plant industry actually started to pick up. In 1984 the government realized the necessity of developing Korea’s own nuclear power plant technology and pushed for the construction of two nuclear reactors between 1987 and 1995, aiming to increase the amount of domestic technology in use from 60 to 95 percent. Thanks to the project, first domestic nuclear plant plant design, the OPR-1000, was developed in 2005. Four more OPR-1000-type reactors started construction from 2006 to 2008.

That process helped Korea develop a new type of nuclear power reactor, the APR-1400, in 2002. That new type is being used at the Shingori 3 and 4 reactors, which had their groundbreaking in October 2008 and September 2009 respectively. It will also be used in two other plants that will start construction in 2011 and 2012.

Compared to the OPR-1000, the APR-1400 has a 40 percent higher capacity and many new safety features. It’s also the design selected for the U.A.E. project.

According to the Ministry of Knowledge Economy, the APR-1400 is 20 percent cheaper to build than France-based Areva’s EPR-1600, known to be the most advanced nuclear power plant in the world. Fuel costs are also 23 percent lower than the EPR-1600.

The ARP-1400, a third-generation model, was developed by Doosan Heavy Industries based on the Westinghouse AP-1000. The government is also planning to push development of its newest nuclear plant design, which the government said will have 10 percent higher capacity and a safety rating 10 times better than the APR-1400.

The budget for development of the new design is 180 billion won, and the process started in 2007. Using domestic technology will save between 5 and 6 trillion won per two reactors built, the government said. Korea plans to become fully self-sufficient in terms of nuclear technology by 2012.

Korea’s nuclear power plants currently show an operation rate of 93.4 percent, higher than the U.S. at 89.9 percent, France at 76.1 percent and Japan at 59.2 percent.

This is an exceptional achievement, considering that it has only been 30 years since Korea took its first steps into the world of nuclear power. Until last year, Korea had repeatedly failed to win nuclear contracts overseas due to its lack of experience outside the country, failing in attempts in China in 2004, in South Africa and Canada in 2007, but the U.A.E. win will be a chance to build its credibility.