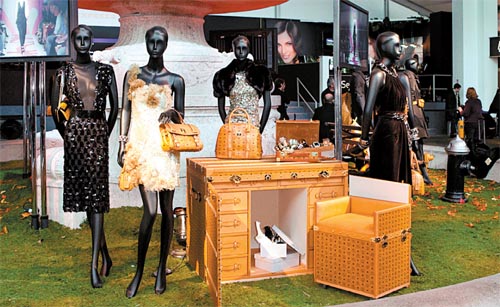 An MCM exhibition at the fashion festival featuring bags and luggage in the Cognac Visetos collection in a party-like atmosphere.

New York Fashion Week, a major industry event hosted by Mercedes-Benz, kicked off Feb. 11 and will continue through Thursday.

This marks the last time that the event will be held in Bryant Park before it moves to a new venue, giving the festival some added significance this time around. 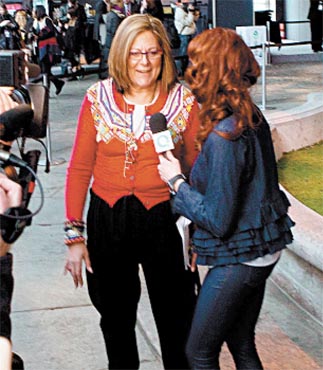 Fern Mallis, executive director of New York Fashion Week, is interviewed by a member of the media in front of MCM’s exhibition.

The Cognac Visetos collection of handbags and luggage by the German luxury brand MCM has generated plenty of buzz. The designs in the collection are presented a exhibits centered around four different scenes. The first, “What a Swell Party” - loosely based on the popular TV show “Sex and the City” - includes young fashionistas holding bags and luggage in a party-like atmosphere. The second scene centers around Central Park and features a couple clad in classical trench coats on a stroll. The third scene, “Executive Decision,” features feminine but powerful businesswomen. The last scene, titled “World Traveler,” features women receiving help with their luggage at a luxury hotel.

These fashion displays rank as some of the most popular of the show so far, capturing the imagination and attention of the fashion world and helping boost the stature of the fashion week festival.

But it doesn’t end there for MCM. Today, MCM is teaming up with the W Hotel to host a cocktail party in the backstage lounge of the hotel’s tent at fashion week. Only a small number of people - including world fashion leaders, trend-setters, models, members of the press and celebrities - have been invited to the party, which will feature items from MCM’s New York collection. The collection was launched last fall at 15 Saks Fifth Avenue branches. It has gained a foothold with customers since then and will be expanded to more Saks stores soon.