How is unemployment data calculated?

How is unemployment data calculated? 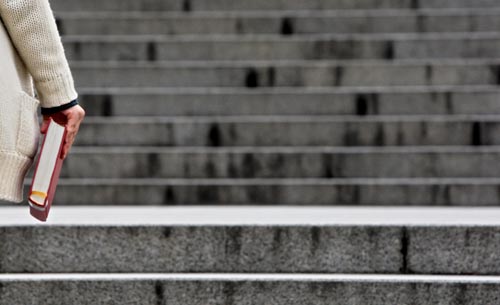 A Seoul National University student ascends the stairs in the school’s library. College students are hitting the books with graduation just around the corner. Many students fresh out of college are now having a tough time finding work. By Cho Mun-gyu


Determining whether someone is employed or out of work appears relatively easy at first glance. You either have a job, after all, or you don’t.

But not so fast. It gets a bit tricky when you factor in people like Lee, a 39-year-old Seoul resident who has never held a full-time job.

Lee, who asked that he be identified only by his last name, has tried numerous times to find a permanent position, to no avail. He held reasonably steady part-time jobs at convenience stores when he was younger, and he still works irregularly from time to time.

So where exactly does he fall on the employment-unemployment scale? 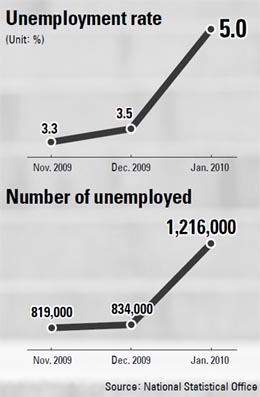 It’s an important question, as many Koreans have become used to seeing headlines and TV newscasts about the latest unemployment figures. These statistics provide a good gauge of how easy - or difficult - it is to find a job and present a snapshot of the nation’s economy.

But to make any sense of this data, you have to know exactly what and who the government is measuring as well as how it’s compiling statistics.

Lee, for instance, had long been classified as an “economically inactive” member of the population, as he wasn’t out there looking for work. People in this group are not included in unemployment statistics in any capacity.

But he recently applied for various public jobs ranging from landscaping to cleaning that were created by the government as part of its Hope Works project, which aims to help poor people and those out of work find positions.

Lee suddenly became a job seeker, as defined by the government, and is now classified as an “economically active” part of the population. This group includes those who are age 15 or older and have jobs as well as those who are jobless but are actively searching for work.

Now that he is lumped in this tier, Lee is included in the statistics. Because he still doesn’t have a job, he is counted as one of the unemployed.

To break it down in simple terms: Lee was out of work before, and he’s still out of work today. The only difference is that he’s now actively looking for a job and is therefore deemed unemployed.

In January, a lot of people in Korea like Lee who weren’t previously looking for jobs applied for public works positions offered by the government. Literally overnight, hundreds of thousands of people suddenly became job seekers.

You can imagine how that affected unemployment data.

But another figure paints a much more disturbing picture.

According to the National Statistical Office, 1.2 million people in the country were unemployed in January, an increase of 368,000 people, or 43.4 percent, from December. It marked the first time that the number surpassed 1 million since March 2001. This is the actual hard numbers, as opposed to the rate.

Such a jump would normally send shock waves across the country. The statistics, though, aren’t as dire as they seem, given the huge number of new people now included in the results because they began applying for jobs. Keep in mind that many of these 368,000 people didn’t have a job in December, either.

“In January, there were more people who were actively seeking jobs as they became more interested in public works and internships provided by the government,” said Eun Soon-hyun, a director at the National Statistical Office.

The government accepted applications for positions as part of its Hope Works program from Jan. 8 to 22. There were 100,000 openings, and 420,000 people applied.

Many of those who applied for the positions were senior citizens who previously weren’t seeking work. Guess what happened: The unemployment rate in January among those in their 60s rocketed 7.4 percentage points from a year ago to hit 8.8 percent.

So now you have an idea of how these figures are calculated, and how they can be misleading if you don’t fully understand what they incorporate.

Even the 5 percent figure recorded in January is much lower than other areas of the world. In the United States, for instance, the unemployment rate hit 10.6 percent in January.

“In the United States, the unemployed are divided into many different categories, while in Korea the definition is very narrow,” said Lee Chan-young, a researcher at Samsung Economic Research Institute. “In Korea, there are a large number of the unemployed who are categorized as economically inactive parts of the population. If these people are counted as unemployed, the unemployment rate would be higher.”

Along these lines, there is criticism that Korea’s unemployment statistics don’t accurately reflect the labor market, as many people who don’t have jobs are not counted as unemployed.

The economically inactive segment of the population, for instance, includes housewives, students, the elderly and those who are studying or training for future careers as well as those who are physically or mentally unable to work.

It also includes “discouraged workers,” or people who can work but have given up searching for a job for whatever reason. Move these discouraged workers over to the economically active tier - they are, after all, out of work - and the unemployment rate would’ve averaged 4.3 percent last year instead of 3.6 percent.

There are other potential problems tied to the classification of economically active residents in terms of those who work minimal hours each week.

If you add in all these groups, including those who are not actively searching for jobs as well as discouraged workers and those who work only a few hours a week, the unemployment number would triple.

Labor market observers said the government has to come up with different approaches to measuring unemployment data.

They also believe more needs to be done to help certain segments of the population find jobs, possibly by, say, providing training for those who lost their jobs or creating more positions for housewives and the elderly.