What is a product recall?

What is a product recall?

A mechanic works to fix the gas pedal on a Toyota Camry at a Toyota dealership in New York on Feb.6. [AP/YONHAP]

These days, you can hardly look at a newspaper without seeing a reference to Toyota and its recent recall.

Toyota, a Japanese company and the world’s largest carmaker, is being criticized for the defects in millions of its cars and the way it has handled the problem. That has focused attention on efforts made by other carmakers worldwide, including Korea’s Hyundai Motor, to recall defective vehicles.

But what is a recall?

In a typical product recall, if a product is discovered to have safety problems or a defect, it is “recalled” to a manufacturer for repair, replacement or a refund. Sometimes, public authorities order manufacturers to do a recall to protect the public from harm if there are problems with a product.

All products can be subject to recall. Products have often been recalled following complaints from consumers.

The Tylenol recall is a good example of a typical product recall. In 1982, Johnson & Johnson, the maker of the pain-relief capsules, recalled around 31 million bottles of Tylenol products in the United States after seven people died after ingesting the drug.

In many of the countries with car manufacturing industries, including Korea, the product most frequently subject to a recall is automobiles.

In Korea, the country’s first product recall occurred when the government ordered carmakers to lower the level of carbon emissions to below a certain level in February 1991. Many of the cars that had already been sold were called back.

That led the Ministry of Land, Transport and Maritime Affairs to establish an official auto recall system in September of that year. The system was gradually incorporated into laws on consumer protection, food hygiene, livestock processing and electricity product safety, among others.

In the Korean recall system, a company planning to recall a product has to submit its recall plan to the government and the public. It must tell the public about the product being recalled, and why and how the recall will be done. Afterward, the company sends a report to the government, which investigates whether the recall has been carried out in an appropriate manner. If the process is judged to have been insufficient, the government can order the company to take additional steps to get it right. 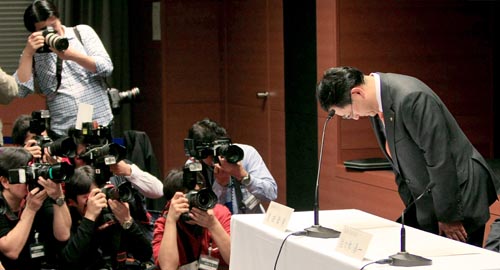 Akio Toyoda, president of Toyota Motor Corporation, apologizes at a recent press conference at the Japanese carmaker’s headquarters in Nagoya, Japan, for its belated recall. [REUTERS/YONHAP]

If the recall is initiated by the government, the manufacturer of a problematic product is given a chance to defend itself before a recall is ordered. If its defense is accepted, the recall is stopped. Otherwise, the recall proceeds as planned. If the company does not follow the recall order, however, company representatives have to pay a fine or are sentenced to prison under the law.

A recall can create a lot of financial damage for a company. It costs a great deal of money to exchange an old product for a new one, fix a problematic part or give customers a refund. For example, Toyota is expected to lose around 1 trillion won ($877 million) due to its recall. It has already recalled over 8 million cars and that number could grow.

But a recall is not always bad news. It can improve a company’s image by showing that the company puts consumers ahead of profit. Experts say that some of the world’s leading corporations intentionally recall their products to build credibility with the public.

If a company is lax about recalling a problematic product, however, the damage to the company’s reputation could far outweigh the financial consequences. A company that is reluctant to do a recall creates distrust among consumers, who could file lawsuits against the company.

Toyota is under fire for being late in implementing its recall plan. According to media reports, Toyota’s U.S. consumers are preparing to launch lawsuits against the company for amounts close to $2 billion.

Korean carmakers have conducted many recalls over the years, but mostly in the domestic market.

Experts say Korea has more lenient regulations on recalls than the U.S., which is the world’s largest car market. 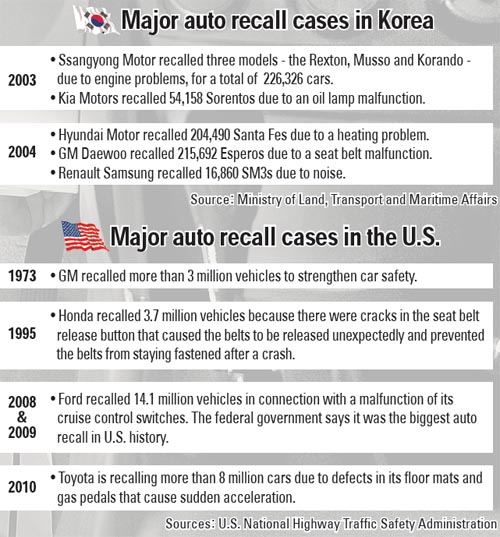 Between 2001 and 2009, between 100,000 and 1.5 million cars, including imports, were recalled annually in Korea, according to the Ministry of Land, Transport and Maritime Affairs. Last year, around 160,000 cars were subject to a recall. There were few major recalls in the 1990s.

The U.S. has a longer history of auto recalls. The first major recall case in the U.S. occurred in 1971 when General Motors recalled almost 7 million vehicles due to problems with its engine mounts that sometimes caused uncontrolled acceleration. The biggest auto recall in U.S. history was done by Ford in 2008 and 2009, when the American auto giant recalled 14.1 million vehicles in connection with malfunctioning cruise control switches.

A recall is sometimes compared with a free repair service, which is aimed at fixing a car or its parts. Unlike the recall, however, it does not require a carmaker to inform the authorities that they are providing the service. Carmakers often provide a free repair rather than conduct a recall of a part or model, just as Ford did last month when it discovered a defect with the brakes on some of its models. Ford said it was a minor problem that would not affect the safety of the vehicle, and decided to provide a free repair rather than recall the problematic cars.

Toyota, however, chose to do a recall last month when the same problem was found with its Prius models.

In Korea, local carmakers tend to prefer offering a free repair rather than conducting a recall because they believe a recall does more harm than good to their reputation.