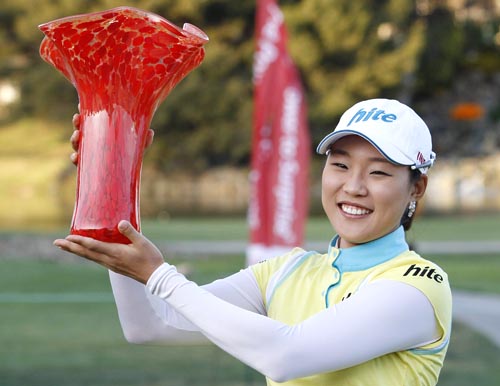 Seo Hee-kyung, of Korea, holds up the trophy after winning the LPGA Kia Classic golf tournament at La Costa in Carlsbad, Calif., on March 28. [AP/YONHAP]


CARLSBAD, Calif. - As Seo Hee-kyung was about to receive the trophy for her runaway win in the inaugural Kia Classic, Michelle Wie was standing near the scorer’s tent explaining her latest rules gaffe.

The 23-year-old Seo, who is not a member of the LPGA Tour, received one of the three sponsor’s exemptions to get into the tournament. An 11-time winner on the Korean LPGA Tour, she can choose to become an LPGA Tour member this year or next.

Wie likely wouldn’t have caught Seo, but the penalty dropped her into a tie for fifth at 4 under.

“They interpreted it differently than what I felt,” Wie told reporters later, down the hill and around the corner from a grandstand where Seo was getting her trophy on the 18th green. “I knew I did ground the club. At the same time I knew that I felt off-balance. I closed my eyes and hit the shot and grounded my club so I wouldn’t fall into the water while wearing a white skirt.

“I accept it,” she added. “I accept the fact that it was a penalty stroke if you ground a club. But the fact is I felt like I was off balance. That’s why I grounded the club. That’s a rule so there’s nothing I can do about it.”

Wie has run up against golf’s rule book a number of times.

In her first pro tournament, the 2005 Samsung World Championship, she took a penalty drop for an unplayable lie during her third round. At the end of the tournament, officials ruled she made her drop at the wrong place and should have taken a two-shot penalty, and disqualified her for signing an incorrect card.

Asked about Wie’s troubles, Seo said: “No, I didn’t care about that.”

Maybe that’s because she seemed to have so little trouble negotiating a long course that almost everyone else struggled with, especially when the breeze kicked up.

“It was difficult to me, too,” Seo said. “This week I had very good swings, I think.”

But someone must have filled her in on California real estate prices.

South Koreans swept the top four spots, with Park (65) finishing second, and Jiyai Shin (70) and Jee Young Lee (70) tying for third at 5 under.

With the victory, Seo has the option to join the LPGA Tour or remain as a nonmember for the current season, then join next season. She said she’ll probably finish the season on the KLPGA Tour and think about it in the offseason.