Why is Goldman Sachs in trouble?

Why is Goldman Sachs in trouble? 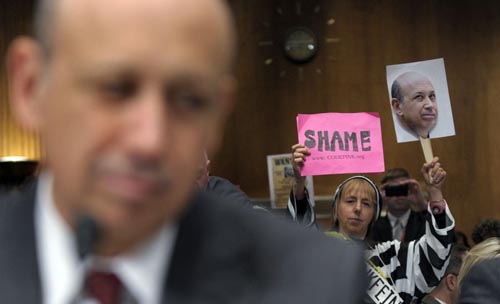 Protestors stand in the back of the hearing room as Goldman Sachs chairman and chief executive officer Lloyd Blankfein, left, sits down to testify before the Senate Subcommittee on Investigations hearing on Wall Street investment banks and the financial crisis on Capitol Hill in Washington, Tuesday, April 27, 2010. [Yonhap, AP Photo/Susan Walsh]


Goldman Sachs, a global investment bank in the United States, has recently been charged with securities fraud involving certain mortgage bonds. The U.S. Securities and Exchange Commission filed a civil lawsuit against the banking giant on April 16, saying that Goldman sold a financial instrument called Abacus 2007-AC1 without disclosing that a hedge fund firm had helped pick the content. The Goldman case is still under investigation and has triggered reflection in the U.S. government over stricter regulations for Wall Street banks.

Back in 2005, John Paulson, a hedge fund manager, was concerned with the poor performance of his company Paulson & Company, so he ordered employee Paolo Pellegrini to look for ways to earn some money. What Pellegrini came up with was to generate profits by investing in the U.S. subprime mortgage market, which lends money to people who don’t meet credit or documentation standards for ordinary mortgages.

Given that housing prices and subprime mortgages in the U.S. were at their peak at that time, Paulson and Pellegrini were certain there were profits to be earned if housing prices started to drop. So they came up with an idea using credit default swaps (CDS), a type of derivative.

The way a CDS works is similar to an insurance policy. If bondholders are concerned by a possible default on their securities, they can purchase a CDS on securities they hold, swapping the risk of debt default. The buyer of the CDS pays a periodic fee or premium to the seller, and in the event of a default, the seller would have to pay the default payment to the buyer.

Basically, a CDS holder’s safety is guaranteed even if negative credit events such as bankruptcy break out. Some use a CDS less like an insurance policy and more like a gamble. Such an investor can purchase a CDS on a bond that may potentially be exposed to the risk of default. If the bond actually defaults, the CDS buyer then earns a large amount of money at once.

What caused Goldman Sachs trouble recently was a CDS on a collateralized debt obligation (CDO), a derivative that consists of different types of subprime mortgages. Back in 2006, there were no credit default swaps on CDOs. To create a product linked to CDOs, Paulson sought out the help of a large investment bank.

Paulson finally found a bank that agreed to create the product: Goldman Sachs. In the following year, the banking giant released a type of CDO called Abacus 2007-AC1, comprised of a total of 90 subprime mortgages.

However, if the CDO faced a default, Paulson & Co. would see gains, while IKB and ACA Capital would experience losses.

In the summer of 2007, a series of defaults swept the American subprime mortgage market due to nose-diving housing prices. Consequently, 99 percent of subprime mortgages included in the Abacus CDO that Goldman Sachs created in February 2007 faced defaults.

As a result, Paulson & Co. made a massive amount of money, totaling around $1 billion, from the CDS it purchased on Abacus. Meanwhile, IKB and ACA Capital ended up losing most of their principal.

Goldman Sachs had nothing to lose, since it earned commissions from both sides. However, one of the reasons that the SEC filed a suit against the financial services group was the “misrepresentation” of the product. Goldman Sachs did not inform the CDO investors of Paulson & Co.’s short position.

Another allegation is that Paulson & Co. was deeply involved in picking the mortgages when establishing Abacus, with its interest in the CDO’s failure. Goldman Sachs, however, did not disclose Paulson’s involvement in picking the risky mortgages, according to the SEC.

Also, Goldman Sachs allegedly lied to investors that Paulson & Co. was an equity investor in the CDO, convincing ACA that Paulson’s interests were also aligned. Fabrice Tourre, the 31-year-old Goldman vice president, is at the center of this allegation. He was a Goldman Sachs employee who was in charge of CDOs back then and allegedly made ACA believe that Paulson would also be investing in the CDO.

That was why investors in the troubled CDO had no doubts about the product, the SEC believes.

Goldman Sachs has been making a counterargument against the SEC’s claim, saying that the bank itself also lost more than $90 million by investing in the troubled CDO.

Also, the financial services giant is denying the allegations that it lied to investors that Paulson & Co. had made investments in the CDO.

Despite Goldman Sachs’ counterarguments, the incident is now gradually spreading to other investment banks on Wall Street. The Obama administration’s financial reform bill including the so-called Volcker rule, which would ban financial institutions like Goldman Sachs from buying and selling for their own profit, rather than as a service to their clients, is also moving forward at a rapid pace.

Meanwhile, there is a rumor that Goldman Sachs CEO Lloyd Blankfein, who has served in his position since 2006, may be ousted due to the recent trouble. However, nothing has been decided yet.