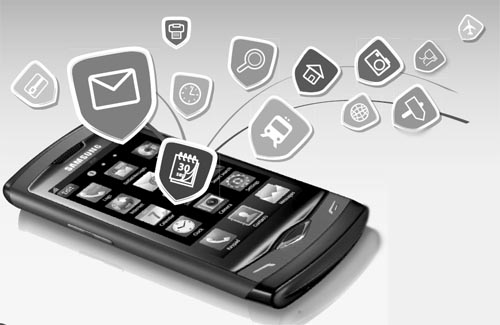 It’s clear smartphones are a trend with legs among fashionable Korean consumers.

Most of us know that a smartphone is a mobile phone that works somewhat like a personal computer.

But how familiar are you with smartphone-related terminology like OS, open source, apps or ecosystem?

Many of these terms migrated over from smartphones’ bulky desktop-bound forebears, but others are brand new.

An OS, short for operating system, is the software that enables smartphones to function, dictating how users can interface with the device and how programs operate. Just look at your PCs: They all run only certain software, usually designed for Microsoft Windows, Mac OS or Linux.

Put in simple terms, the OS is the most basic level of software inside the machine. It may not always be very visible, but it’s as important as the machine itself because it determines what the hardware can and cannot do, and how it carries out certain tasks.

Operating systems are also called platforms in certain cases. However, technically “platform” is a larger term encompassing both the architecture of the hardware and the software.

So what are some popular operating systems for smartphones?

According to the U.S.-based information technology research group Gartner earlier this month, the most popular operating systems in smartphones in the first quarter around the world were Symbian, RIM,
iPhone OS, Android and Windows Mobile, in that order.

Symbian is developed by Finland-based Nokia and is often found in Nokia phones. RIM, short for Research in Motion, was created by the Canadian company of the same name and is used in that company’s Blackberry smartphones.

The iPhone OS is from Apple and Android comes from Google. Both are based in California in the United States, and they are archrivals like Korea’s Samsung Electronics and LG Electronics. Windows Mobile is Microsoft’s OS for smartphones. 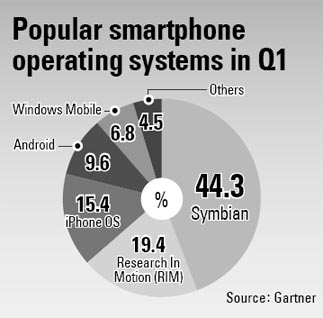 Interestingly, industry sources say the operating system has emerged as the key deciding factor when customers purchase new smartphones. This basically means people will be asking themselves questions such as, “Do I want Android or Windows Mobile?” as opposed to “Do I want Motorola or Samsung?”

Observers are paying particular attention to Android OS, saying it will grow quickly in the coming years. Gartner, for instance, forecast that Android phones will overtake iPhones in 2012, grabbing the runner-up spot after Symbian.

Applications, sometimes called apps, are the pieces of software that allow people to perform specific tasks on their smartphones - for example, reading the newspaper, finding the nearest coffee shop, or notifying you about when the bus will arrive.

Although both applications and operating systems are software, applications are layered on top, in that they make use of the functions of the system software.

People can download apps and personalize their smartphones just as they might buy and install programs like Adobe Photoshop, GOM Player or AhnLab antivirus software for their PCs.

Some apps are offered free of charge; others are available at an additional cost.

Which apps are the most popular?

According to a survey of Korean iPhone users by Digieco, a management research institute affiliated with KT, apps for public transit routes and maps have been the most popular, along with social networking and scheduling software.

The average Korean iPhone user has 86 apps on his or her handset and spends 5,800 won ($5) at the App Store every month, the survey said.

The report showed that of some 189,000 apps available for download, only 1,900 have actually been downloaded from the App Store by a Korean user. This is a reflection of how difficult it is to succeed in app development.

Recently Korean government agencies, corporations and academics have taken notice of this new, booming market. They have vowed support for app developers, unveiling plans for financial subsidies, contests and training.

One concept that’s also important to grasp when talking about smartphones is the two different types of operating systems.

Operating systems for smartphone can be divided into two different types: open source and closed source.

“Open source” means the code for the operating system is publicly available. On some open-source systems, developers can freely upload applications and smartphone users can download the software of their choice. In contrast, a company developing a closed-source OS keeps the code private, and may control what apps are available. 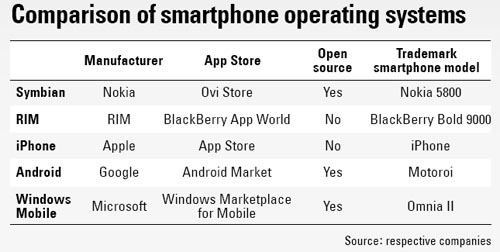 Google’s Android operating system is the most important open-source phone architecture, while Apple’s iPhone OS is the flagbearer of the closed-source concept.

There are of course pros and cons to each.

An open-source OS offers a much greater variety of apps and consequently more options for customizing your smartphone, but there is the risk of more exposure to harmful viruses.

A closed-source OS, meanwhile, is less vulnerable, but may be criticized for being too controlled and proprietary. Apple, for example, has been criticized for refusing to release its standards for suitable applications.

Another word often used in the smartphone industry is “ecosystem.” A smartphone ecosystem is the platform of the hardware and operating system as well as the network with vendors and services.

Most industry observers say the smartphone ecosystem so far has two major camps - Apple and Android. They say the company that manages to make its ecosystem more populous will likely succeed in the smartphone war.

“To compete in such a crowded market, manufacturers need to tightly integrate hardware, user interface and cloud and social networking services if their solutions are to appeal to users,” said Roberta Cozza, a principal research analyst at Gartner.