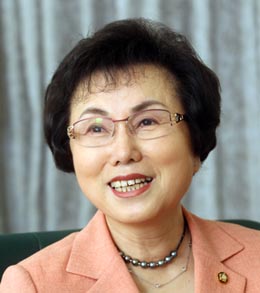 When Yuk was killed in a botched assassination attempt on the late president on the Aug. 15 Liberation Day in 1974, she was hurriedly rushed to the hospital in Wonnam-dong, central Seoul, with her husband.

At the time, Lee was a nurse at the hospital and assisted doctors as they tried in vain to resuscitate the slain first lady.

In an interview with the JoongAng Ilbo, Lee recalled Yuk’s arrival at the hospital just nine minutes after she was shot in the head by assassin Moon Se-kwang at 10:23 a.m. Yuk’s brain surgery began at 11 a.m. and lasted for over five hours.

Lee was the head nurse in the VIP ward of Seoul National University Hospital for 35 years until 2005. There, she cared for Korea’s heads of state, except for Roh Moo-hyun and Syngman Rhee.

The peaceful morning on a national holiday was turned into a nightmare when Yuk was shot. The ceremony she had been attending was broadcast live across the country.


Q. How did the surgery go?

A. The bullet entered Yuk’s head. The bullet didn’t exit her skull, but was lodged inside her brain.

The bullet hit the biggest vein on the right side of brain. When the surgery began 30 minutes after the assassination, blood was spurting out. Yuk’s blood type was AB, which is a rare blood type and tough to get at hospitals in Korea.

Our staff went to hospitals nearby and the Red Cross Blood Service to secure an extra supply of AB blood. But we didn’t have enough.

At that time, we stored blood in a 400-milliliter bottle and a total of 149 bottles were used during her surgery.

Why was the surgery so difficult?

After undergoing the five-hour surgery, Yuk’s surgeon deemed that the situation wasn’t good. He asked me to get a new bed sheet to cover the patient. Knowing that she would pass away soon, tears rushed to my eyes. When I arrived with the bed sheet, the first lady’s face was wrapped with compression bandages from her forehead to her nose. Her body and the area around her mouth had become swollen because of the bandages.

What was the reaction of Dr. Shim Bo-seong, who was in charge of the surgery?

Shim lamented that the surgery hadn’t gone well. A day after the surgery, he told medical staff that he could’ve saved her if the bullet had hit just 5 millimeters from the vein. He passed away not long after retiring.

No, he wasn’t. He was in charge of the surgery because he was the chief of the hospital’s neurosurgery department at the time. Shim was actually scheduled to play a round of golf on that day, but the arrangement had been canceled because of rain. At the time of the shooting, he was watching the Liberation Day address on television at home. When he saw Yuk’s shooting, he realized that he should be on standby and he rushed to the hospital. At that time, he was living in Sinseol-dong, which was near the hospital.

What happened after the surgery?

Yuk was changed into a new patient gown and moved to the intensive-care ward, which was located next to operation room. I wasn’t really paying attention because the surgery hadn’t gone well.

Someone behind me patted my shoulder. I turned around and it was President Park Chung Hee. He had a look that was mixed with 100 feelings. The look in his eyes contained many feelings, but there were no tears. He just looked at her.

Our staff left the room so that the two of them could say goodbye. Park stayed with her for about 20 to 30 minutes and returned to the Blue House with his family. Keeping his head down a bit, he walked down the [hallway] with his mother-in-law, his hand holding her shoulder tightly.

Where was Yuk taken next?

Not long after the president left, the sky turned red. It was red with a strong violet color. Our staff thought that was when Yuk passed away and it turned out that was right. Yuk had relied on artificial respiration to keep her breathing. Not long after the sky turned red I received a phone call that she passed away. Her body was moved to the Blue House at 7:30 p.m.

Many people have heard the story of the first lady’s underskirt. How was it found?

An official at the Blue House called that evening, asking our staff to send Yuk’s belongings. But her belongings were already thrown away.

When Yuk arrived at the hospital, she was wearing a hanbok [traditional Korean dress] decorated with a small waterdrop pattern. Her hanbok had been ripped open to change her into a patient gown and the hair on her head shaved in preparation for the surgery. Her shaved hair and ripped hanbok were classified as trash. Our staff searched everywhere to find them. When we eventually found them, I saw that her hanbok underskirt had been mended in three places. We cried again because the state of the dress implied that she had lived a frugal life - even as the first lady.

Did President Park usually use Room 301 - the VIP room?

He had actually been scheduled for eye surgery in early October 1979, but was never admitted to the hospital. I went to Dongdaemun market to buy bed sheets, toothpaste and a toothbrush for him. I did that because I didn’t want to be scolded for not giving him domestic products. I also bought a patient gown to fit his 165-centimeter height and slippers - all made in Korea. He called the hospital on Oct. 15 and was assassinated on Oct. 26.