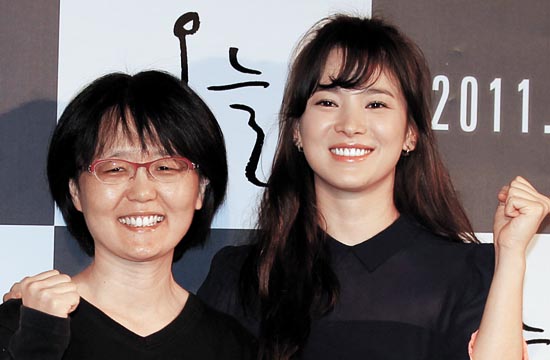 
When actress Song Hye-kyo heard that Lee Jung-hyang, one of a handful of female Korean directors in the country, was making her first film after a nine-year hiatus, dreams of working with Lee began to formulate. But instead of waiting for her agent to hook her up with an audition, Song called Lee herself.

Like many young actresses, Song was feeling the effects of a film industry that has in recent years been tilted toward men. There are few women in the director’s chair and these days leading women in strong roles are a rarity. Just two of the hundreds of films released this year have featured women in the lead, “Sector 7” and “Sunny.” Both were directed by men.

It is this absence of women that has heightened anticipation for Lee’s new film, “A Reason to Live,” which is slated for release this month.

Actress Song Hye-kyo, who plays the lead, told the press during a prescreening of the film last week that many actresses like herself were hoping to work with Lee. 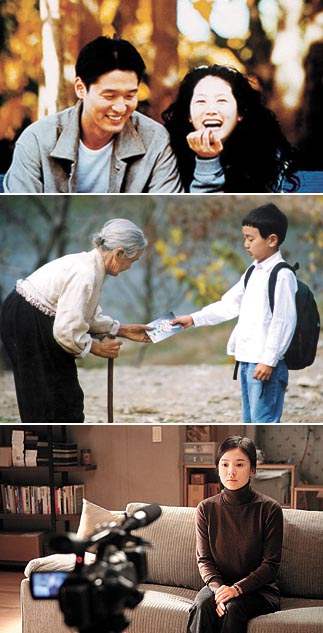 “Then there were rumors that Lee was coming back with a new film, so I contacted her and that’s how I landed the role,” Song said. “I hadn’t even read the whole screenplay but I told her that I wanted to be a part of her film because I’m a huge fan of her work.”

The new film follows Da-hye (Song), a documentary producer, who finds the strength to forgive the 17-year-old boy who killed her fiance but instead of redemption finds only greater tragedy.

Lee made her directorial debut with the 1998 hit “Art Museum by the Zoo,” a romance featuring now-retired actress Shim Eun-ha. The film is still considered a classic of 1990s Korean cinema and Lee received many awards for her sophisticated and detailed direction.

Her second film “The Way Home” (2002) was also a hit. Though the film lacked big name stars to promote it, Lee proved she is immune to the sophomore slump with a simple story of a grandmother who lives in the countryside and her spoiled grandson from the city who comes to live with her. The film attracted about 5 million viewers, but afterward Lee disappeared from the public eye, leaving many to wonder what she has been doing.

“That’s the most common question I get from reporters these days,” Lee said with a grin when asked what she’s been doing for the past nine years.

“For about two years after ‘The Way Home’ I did nothing but enjoy my life and then around 2004 I started to add the finishing touches to the synopsis of ‘A Reason to Live,’?” Lee said. “But I had to change most of it. I had written the synopsis when I was young, even before my debut. But [years later] I came to have a different point of view about the story and I also had to do more research about the victims of fatal accidents.”

The central theme of “A Reason to Live” is forgiveness. Lee said she wasn’t interested in providing viewers with a comfortable portrait of grief. She also said she hopes the film will provide accident victims’ families with some consolation.

“The families of accident victims go through a difficult time, and some feel that they must go through the rest of their lives being full of resentment,” Lee said. “But I wanted to tell them that they should live for themselves and not for the anger. That’s why the [Korean] title of the film is ‘Today.’?”

During the prescreening event, Lee also shared her experience with Song, who is widely beloved in many Asian countries.

“When she contacted me, I was stunned because I had never thought about her as a potential actress for the role of Da-hye,” Lee said. “But I changed my mind after I met her. I’ve realized that there is a huge gap between who the actress Song is and who she is as a person. After seeing the ordinary side of Song, I caught glimpses of Da-hye, and I have no regrets about working with Song on this film.”

“A Reason to Live” will premiere at the Busan International Film Festival at a gala presentation that introduces the works of world-famous directors. It will be released at theaters nationwide on Oct. 27.