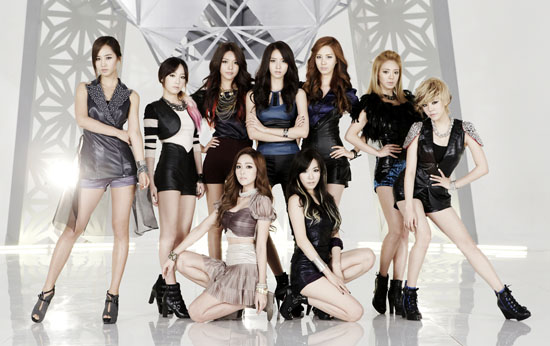 For the new album “The Boys,” Girls’ Generation members take on individual elegant and feminine looks. Below, the girls wore sailor uniforms for “Genie” in 2009. Provided by SM Entertainment


Girls’ Generation and the Wonder Girls, the nation’s most popular girl groups, are competing in a friendly fight again - heating up the music industry with new albums and new types of stage performances.

The must-have factors for an idol group are dance and fashion, so it’s a given that these two groups are working to bring high-fashion to the dance floor. This season, while the Wonder Girls flaunt femininity, Girls’ Generation puts forth a chic look with black and white as their main tones.

Five years ago, when these two groups first appeared on stage, they pursued a preppy look, applying slight adjustments to the original school uniform. Upon their debut, both groups aimed to convey a schoolgirl image. Half a decade has passed, and with it their fashion has changed.

In August of 2007, Girls’ Generation broke through with bright dance music.

“Into The New World” was performed with the girls wearing Converse shoes and pastel-colored skirts. A remake of the veteran singer Lee Seung-chul’s 1989 hit song “Girls’ Generation” was their follow-up song in November 2007.

For “Gee” and “Genie” in 2009, Girls’ Generation dressed in uniforms, grouping the nine members together and amplifying their appeal.

“To do so, I coordinated the girls with simple white T-shirts and jeans, or vibrant-colored skinny jeans.” 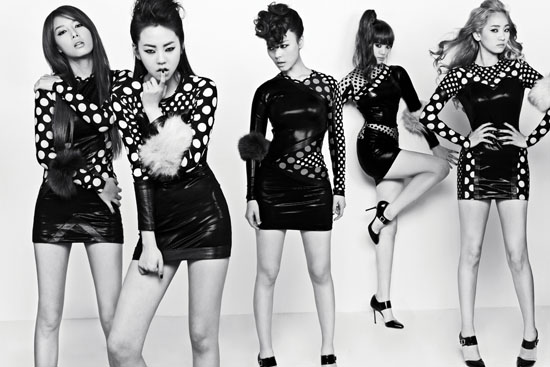 Wonder Girls’ new song “Be My Baby” emphasizes femininity while “Nobody” from 2008, below, gained popularity with retro-style fashion. Provided by JYP Entertainment


Min decides the outfits of the girls according to his first impression of the song. The sensual uniform outfit of “Genie” and cheerleader concept of “Oh” was finished in this manner. For “Run Devil Run,” in early 2010, Min came up with the image of Jessica Alba in “Sin City,” and styled the girls as “Bond girls” for the song “Hoot” in late 2010.

The outfits for Girls’ Generation’s new track “The Boys” were matched to the confident song and lyrics. Unlike before, the outfits are not uniforms, but instead Min tried to cater to the preference and appeal of each girl.

Each member is assigned a different skirt, pants, cape and jacket. For those who are used to seeing the girls in identical uniforms, this may be a surprise.

“I was inspired by the final stage of the Victoria’s Secret fashion show. Each model has her own unique underwear, yet the glamour is still expressed in unity,” said Min.

“The image of ‘healthy lady’ will be a basic, enduring concert for Girls’ Generation.”

As for the Wonder Girls, the girl group took the stage with “Irony” for the first time in February of 2007. The song was a dynamic dance song about being unable to believe a boyfriend that is acting innocent. By presenting a modified preppy look, the girls conveyed the image of a bubbly teenage girl.

Their following tracks “Tell Me” in late 2007, “So Hot” and “Nobody” in 2008 were their retro trilogy, bringing them the image of “retro girl-group.” Though they were all retro concepts, slight variations were given depending on the impression of the song.

“Tell Me,” a song with strong disco beats, represented the ’80s with colorful leggings and lace outfits. Lyrics of “So Hot” portray women who are tired of being so beautiful.

To present confident, lively girls of the ’70s, the Wonder Girls used leopard print. Jazzed-up sparkling outfits that resonated a sense of the ’60s completed the retro look for “Nobody.”

The new “Be My Baby” has broken free from the old retro look, and the outfits also amplify a feminine image.

“Johnny Wujek, stylist of Hollywood’s famous Katy Perry, decided on this song’s outfits,” said Han Soo-jeong of the public relations group of JYP Entertainment. “By focusing on neutral colors such as black and white, the Wonder Girls left behind their vibrant colors. Instead, the neutral colors portray intensity, and see-through fabric was used to show off their femininity.”

The Wonder Girls added dotted patterns on the see-through fabric to tone down any garish impressions. The girls also wear fur bracelets, adding splendor and charm.

“The unchanging standard for the outfit of the Wonder Girls will be popular appeal,” said Han.

A stylist who has worked at various photo shoots with both Girls’ Generation and the Wonder Girls said the groups are showing off their diversity through their fashion. Their fashion, along with their music, is developing as the years go by.