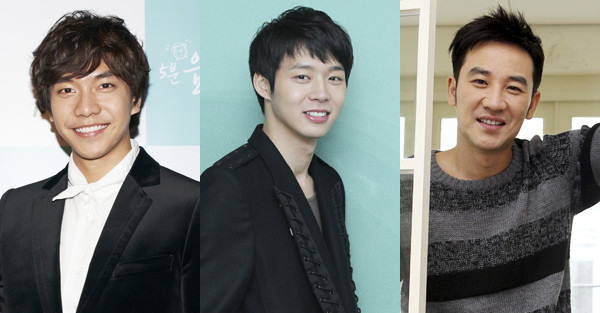 
With the spring drama season on the horizon, the three major networks have lined up three heartthrobs to add sizzle to the small screen on Wednesday and Thursday nights.

They are Lee Seung-gi, who is one of a few entertainers with successful careers in both acting and singing, rising singer-actor Park Yoo-chun and actor Um Tae-woong, who is returning to television for the first time in two years.

The winner of the previous network battle for Wednesday-Thursday drama viewers was MBC’s “The Moon that Embraces the Sun,” which had an audience share of between 35 percent and 38 percent on average.

The three series, of which two are romantic comedies and one a melodrama, begin airing on March 14.

Here are brief summaries of the new series and the actors involved.

MBC, which regained its drama series dominance with “The Moon that Embraces the Sun,” seems to be betting that Lee will help it maintain its No. 1 spot.

The network has watched its two rivals SBS and KBS surpass it in the ratings in recent years, but “The Moon that Embraces the Sun” was the first drama to gain an audience share of more than 20 percent.

Lee is no stranger to romantic comedy, having starred in the 2010 hit “My Girlfriend is a Nine-Tailed Fox.”

His return to television is highly anticipated among fans due to the fact that he is slated to pair up with Ha Ji-won, a widely beloved actress whose turn as the tough and buff stunt woman in last year’s “Secret Garden” won fans over.

Though “King 2 Hearts” may remind some viewers of the 2006 MBC hit “The Palace” since both dramas are set in constitutional monarchies, there is enough to distinguish the two from one another and keep viewers tuned in.

In “King 2 Hearts,” Lee plays a prince who gets involved with Ha, a special forces instructor from North Korea, when they are locked into an arranged marriage.

Though the two initially struggle to overcome their differences, they eventually work things out and fall in love.

Ratings for SBS’s “Take Care of Us Captain” were lower than predicted, but TVXQ member Park Yoo-chun is expected to give the network’s new drama a fresh twist.

Park plays a crown prince of the Joseon Dynasty who travels across time zones to Seoul after he loses his beloved (played by Han Ji-min).

“Park usually shows us his sensitive side, but this role is going to be a little different for him,” said Lee Hee-myung, who writes the show. “This time, you will see more of his charismatic side.”

Park debuted in 2004 as a member of boy band TVXQ but has recently begun to appear in a series of dramas including “Miss Ripley” and “Sungkyunkwan Scandal,” both of which became hits.

Um Tae-woong has spent the past couple of months honing his comedic skills on the popular variety show “1 Night, 2 Days,” but his return to dramas will see him in a darker role.

In KBS’s “Equator Man,” Um plays a successful and passionate businessman who must relive the childhood trauma of losing his father.

The drama is written by Kim In-young, who wrote the 2008 hit “Women of the Sun.”