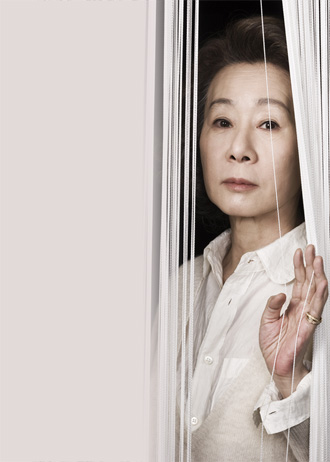 Actress Yoon Yeo-jeong will step onto the red carpet at the Cannes Film Festival for the second time this year. By Kwon Hyuk-jae

For the second time in her career, Yoon Yeo-jeong will walk down the red carpet at the Cannes Film Festival this year - and she’s getting a lot of attention from the press.

In “The Taste of Money,” Yoon reunites with Im for the fourth time, playing a ruthless middle-aged wife of a wealthy, conglomerate-owning family.

She becomes the center of the drama that unfolds and touches upon the ever-popular themes of corruption, greed and sex.

In “In Another Country,” she stars alongside French actress Isabelle Huppert in a small seaside town in Korea.

The actress’ first time at Cannes was also with Im back in 2010 for her role in his film “The Housemaid,” the award-winning remake of late Kim Ki-young’s film from 1960. She played the head housemaid in an upper-class family.

“The last time [at Cannes], I just went without really knowing anything. I just did what Do-yeon [actress Jeon Do-yeon who won best actress at Cannes in 2007] told me to do. But this time, maybe I can take the lead,” said Yoon with a laugh.

The 2010 film “Ha Ha Ha,” which was also a collaboration between Yoon and Hong, also made an appearance at the Cannes festival and took home the Prix Un Certain Regard.

In that film, Yoon played a supporting role as the mother of one of the lead characters.

Her two films this year feature the veteran actress in quite polarizing roles.

In “In Another Country,” Yoon plays an unrefined country woman who interacts with Huppert’s character when she comes on a visit to Buan County, North Jeolla.

In “The Taste of Money,” she plays a businesswoman who thinks she can conquer all. She also appears in her first on-camera sex scene, a quite unexpected requirement for the actress.

“I didn’t know there was such a scene when I began,” Yoon, 64, said. “After I found out, I was really surprised and asked the director, ‘Don’t you think the audience would be offended to see an old woman naked on screen?’?”

“The director answered, ‘I wrote in the scene intending on that very thing,’?” she continued. “It was hard to try and look undaunted during filming.”

Though today Yoon is better known for more family-friendly television dramas and films, she made her acting debut in the 1970s playing extremely risque roles in a number of critically praised, experimental films by late director Kim Ki-young, including “The Insect Woman” (1972) and “Woman of Fire” (1971).

The two films are part of Kim’s housemaid trilogy, while the third film is “The Housemaid,” which was remade by Im in 2010.

“Many actors shy away from working with him because he is provocative and daring, but that is how he views the world,” Yoon said of working with Im.

“When you become my age, you start to accept other people’s tastes.”

When asked which filmmaker she thinks might take home the coveted grand prize at Cannes this year, she simply said, “[To guess] would be the act of a foolish old person.”

“Some people might perceive the fact that I am filming two TV dramas [“The King 2 Hearts” and “You Tumbled into My Life”] at the same time as excessively greedy for an old actress like myself,” she added.

“I don’t mind being called an old actress, but I do worry about how to carry on my acting career without looking like an old fool.”