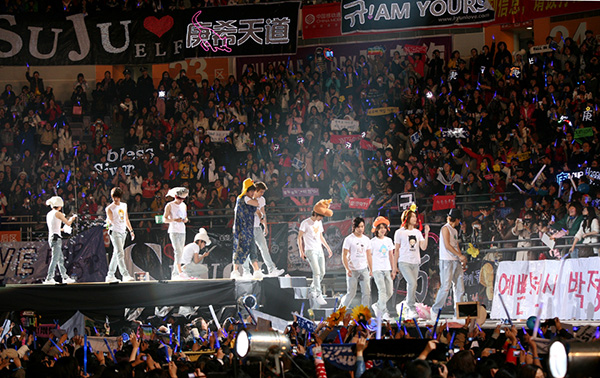 Super Junior performed in Nanjing, China, in 2009. While Hallyu is relatively new to Western countries, Korean pop artists have enjoyed popularity in China for the past decade. [JoongAng Ilbo]


Chinese President Hu Jintao once said: “When a cock crows in Qingdao, it can be heard in Incheon.” He was referring to the geographic proximity of China and Korea.

Over the past 20 years, the two countries have become politically, economically and culturally closer through frequent exchanges.

While there is much talk these days about Hallyu in Europe and the United States, the phenomenon began in China. H.O.T., one of Korea’s first boy bands, performed in Beijing in February 2000. Back then, the world knew little about what Korean music had to offer, and H.O.T. became the first Korean group to perform overseas. It was during that time that SM Entertainment, which managed H.O.T., began using the term Hallyu.

The performance wasn’t a mega-success, but the seed was planted. In subsequent years, the Chinese people’s interest in Hallyu grew as they were exposed to such stars as actress Lee Young-ae, from the history drama “Daejanggeum,” Jang Na-ra and Jang Seo-hee, and K-pop talents like Ahn Jae-wook, TVXQ and Big Bang. 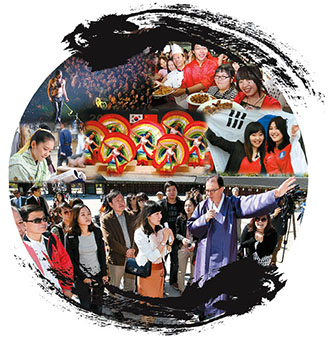 All this led to an increasing number of Chinese tourists visiting Korea.

According to the Ministry of Culture, Sports and Tourism, 1.02 million foreign tourists came to Korea in July, breaking the million mark for the first time. Of those, 320,000 (27 percent) were Chinese, who became the largest group of foreign tourists, surpassing the Japanese.

In 1992, when the two countries normalized diplomatic relations, Chinese accounted for just 2.7 percent of foreign tourists.

“The rapid surge in Chinese tourists appears to be due to the government’s attempts to ease regulations like visa issuance and immigration control, as well as marketing activities targeting students and Hallyu fans,” says Lee Kwan-pyo, an official at the ministry’s international tourism division. And the tourism boost goes both ways as the number of Koreans visiting China nearly tripled from 1.34 million in 2000 to 4.18 million last year, according to a report by the Korea Culture and Tourism Institute, which is part of the Culture Ministry. Koreans favored eastern China, especially Shandong Province, according to the report.

Nonetheless, a recent series of spats between the Koreans and Chinese, in particular in the realm of the Internet, indicates that the two are not yet best friends despite the progress over the past 20 years.

Experts say that during the early stages in the normalization of bilateral relations, Chinese viewed Koreans with admiration and respect, especially in regard to the country’s rapid economic development.

But that changed with increased Internet access in China, which is thought to be one of the main culprits in the spread of false rumors about how Koreans look down on the Chinese. Another factor is that some Chinese are disappointed after visiting or studying in Korea.

Yonhap made no such report.

Nonetheless, Chinese netizens were furious, putting up angry postings like “Koreans are shameless,” “Koreans should stop resorting to dirty tricks” and “In that case, one can argue all Koreans are Chinese by blood.”

As for Koreans, anti-Chinese sentiment is thought to have started in the early 2000s, when they perceived that China strengthened its position that all historic events on Chinese territory are part of China’s history, including the ancient Korean kingdoms of Goguryeo and Balhae.

“During the past 20 years, bilateral relations improved fairly well on the surface, but there are concerns, such as a lack of trust between the two governments and negative emotions between the people,” said Wang Xiaoling, an assistant researcher at the Institute of Asia-Pacific Studies of the Chinese Academy of Social Sciences.

Dong-A Ilbo, a major Korean newspaper, recently reported on how Chinese students studying in Korea are discriminated against and mistreated, struggling with derogatory remarks and condescending attitudes. According to the newspaper, students it interviewed said “they have no plans at all of staying in Korea” after finishing their studies and have “few good things to say about Korea” when they go back home.

According to a survey by the Korean Educational Development Institute, 41 percent of Chinese students in Korea have negative feelings toward the country. The institute talked to 1,220 Chinese students at 15 universities. And it seemed that the longer the students stayed in Korea, the less they liked it: 57 percent of those who studied here three to four years expressed dislike for Korea, while the figure was lower for those who studied in Korea for shorter periods of time.

As for why they had negative feelings toward Korea, the most frequently cited reasons were “Chinese media’s reporting on Korea” and “Koreans’ discrimination and mistreatment of Chinese.”

And it appears these students view China-Korea relations as worse than China-Japan relations: 22 percent said China has better ties with Japan than with Korea, while 14 percent said the opposite.

In addition, reports have surfaced that though the popularity of Korean pop music in China is still strong, such is not the case with dramas.

A report by the Culture Ministry and Korea Creative Contents Agency said the number of dramas exported to China in 2009 was 16, down from 29 in 2008 and 17 in 2007. They added that predictable and monotonous stories and plots have made Chinese audiences turn to Taiwanese or American dramas.

In Korea, there have been some efforts to change negative perceptions between the two countries.

On July 22, the Ministry of Foreign Affairs and Trade asked netizens how to ease anti-Chinese and anti-Korean sentiments and improve the relationship between the people of the two countries.

A ministry spokesman said: “There are many distorted facts about Korea and China on the Internet that are causing emotions and tensions to rise. This could have a negative impact on future relations between the two countries.”

The ministry collected ideas until the end of the month and will incorporate the best suggestions into future diplomatic strategies.

Early this month, the Northeast Asian History Foundation and International NGO History Forum for Peace in East Asia co-hosted a writing contest for teams of Korean and Chinese university students on ways to overcome prejudice and misunderstanding between the countries.

The winning team - Park Jung-ung and Lu Yang of Nanjing University - said the Internet and some minor Chinese media seeking public attention are to blame, adding that working together on the paper helped the students understand each other better and more exchanges should take place.

Jeong Jong-ho, a professor at the Graduate School of International Studies at Seoul National University said: “As the U.S. and Europe did after World War II, in order for Korea and China to tackle the roots of their conflicts and solve them well, there should be active exchanges between young opinion leaders.”