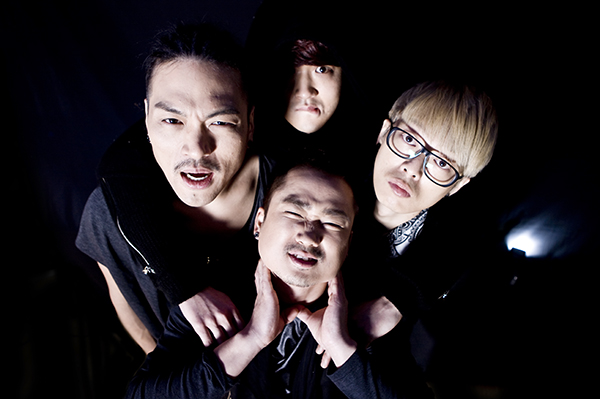 Four-member rock band Guckkasten has risen from obscurity to fame in an instant by playing impressive covers of popular songs on the music competition program “I Am a Singer.” By Kwon Hyuk-jae

The rock band was at first well known in the indie music sphere as the winner of Best New Band and Best Rock Song for “Mirror” at the 2010 Korean Music Awards. But few outside the indie scene had heard of the group.

That all changed when Guckkasten appeared on popular singing competition program “I Am a Singer 2” in June. The group was ranked No. 1 with its rendition of Lee Jang-hee’s “Memories of a Drink.” The feat was especially impressive because the other contestants were prominent veteran singers.

The JoongAng Ilbo met with the up-and-coming stars at an ensemble room in Yangjae-dong, southern Seoul. The four members, Ha Hyun-woo (vocalist), Lee Jung-gil (drummer), Kim Ki-bum (bassist) and Jeon Kyu-hom (guitarist), say they are in the midst of the busiest, and best, year of their music carriers. 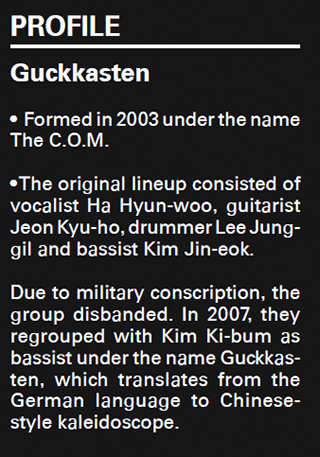 Q. Did you all expect to generate such a rave response?

Ha: We thought it would be funny if we took part in the competition show. Our team has some strong points that can be appealing on stage. We expected to rank No. 2 or 3, but never imagined finishing in first.

For how long does your group plan on staying on the show?

Ha: We plan to stop performing on the show after two months to prepare for our second album. But we decided to delay its release until next year.


This must have been a special year for Guckkasten. How do you all feel about your meteoric rise?

Ha: My family treats me well. I used to come off as a man about town to others in the past. But, [after appearing on the show], I became the proud son of my parents. A regional newspaper in my hometown Jeonbuk ran a story about me.

Lee: We’ve become three times as expensive as we were in the debut years. We finally have our own practice room for the first time since our debut. Our management agency paid for the rent after we made a splash in the music competition show.

What was it like before appearing on ‘I Am a Singer’?

Ha: Our lives were miserable. We had meals without any side dishes. We even sprinkled salt on the rice as a side dish and sometimes, we would even freeze our ramen soup to have it later. This was in the early 2000s when we worked part time jobs to keep pursuing our passion for music.

One bandmate delivered food while others worked at a glass factory and as a bus driver for an art institute. We were terribly busy and exhausted, but never stopped the music.

Guckkasten’s music is dramatic and combines poetic lyrics with psychedelic sounds. But some say the lyrics are hard to understand.

Ha: The lyrics are inspired by my dreams and books. I wrote the lyrics, but I also find them difficult to understand.

My lyrics may not fit into written form because I just wrote them down based on a series of images that pop into my mind.

What kind of music does the group want to pursue in the future?

Guckkasten changed talent agencies from indie label Ruby Salon to Yedang Entertainment Company. Some are debating whether or not the rock band is actually indie.

Jeon: People think a group playing a show in the Hongik University area is an indie band. But even when we were performing there, we didn’t think of ourselves as an indie band. We don’t want to keep ourselves in a certain frame or concept as we want to have a broad view of music.

But we are grateful for the scene to accept us when we didn’t have any ground or experience.

Lee: “Indie” stands for “independent.” In this regard, we are in line with the term because we want to present songs independent of a specific concept.

Ha: We just want to make a living playing music for a long time.