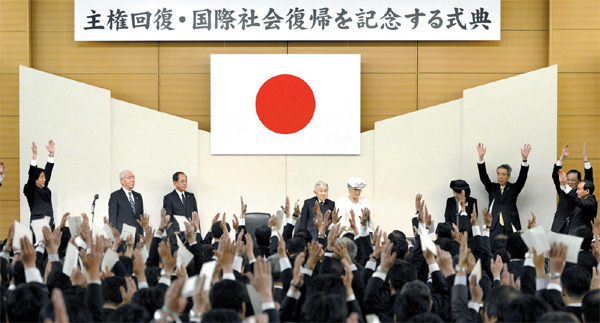 TOKYO - A group of 180 right-wing Japanese politicians of both the ruling and opposition parties gathered in a conference room of the House of Representatives in Tokyo on Feb. 27.

They convened for a meeting of the Japan Conference, an ultra-partisan group of right-wingers in politics, business, academia and cultural circles that pushes for constitutional revisions, nuclear-arming and other issues to promote a nationalist agenda. The group wields significant political influence.

The meeting included Takeo Hiranuma, a former minister of economy, trade and industry in the Junichiro Koizumi government and a right-wing Japan Restoration Party representative; Eriko Yamatani from the conservative Liberal Democratic Party and a member of the Upper House of the Diet who asserts that there is no truth in the claim that the Imperial Japanese Army organized the abduction of women from Korea and other Asian countries; and Seiichi Eto, a special adviser to Prime Minister Shinzo Abe.

The meeting was chaired by Hiranuma while Yamatani serves as chief policy maker and Eto as secretary general.

Yoshiko Sakurai, commentator and president of the Japan Institute for National Fundamentals, spoke at the meeting to push for constitutional revisions to grant Japan more sovereignty.

“We have to take advantage of the high support rate of Abe’s cabinet to reset the foundation of Japan,” Sakurai said. “In order to do that, we have to revise the Constitution.”

She stated that Article 96 of the Constitution of Japan - which stipulates that amendments can be made to the Constitution only with approval by two-thirds of both the upper and lower houses of the Diet - has to be revised to lower the bar.

Then she asserted that Article 9 - which prohibits war - has to be rewritten. “We all have to step forward to protect our sovereignty,” she said.

Following approving remarks from other members of the conference, they immediately passed a resolution by Sakurai. Ten days later, on March 9, Prime Minister Abe officially addressed the issue of revising Article 9 for the first time since he took office in December, and his Liberal Democratic Party proposed a draft amendment to limit the renunciation of war.

Abe also reaffirmed his intention to make the constitutional amendment process easier by prioritizing a revision of Article 96. A month later, on April 8, Chief Cabinet Secretary Yoshihide Suga said, “There is a need for the revision of Article 96 to be a main issue in the House of Councillors election” in July.

The organization, which dates back to 1997, has some 30,000 members nationwide. Including affiliated nationalist organization, its reach tops eight million people.

Diet representatives have a strong presence in the group, from around 100 before Abe’s landslide victory last December to 252 now. Over two-thirds of his cabinet are members, including Abe, who currently boasts a 70 percent approval rating ahead of the July Upper House elections.

On Sunday Abe declared a “restoration of sovereignty day” to mark the end of the end of World War II and Japan’s occupation by the allied forces. The ceremony was attended by Emperor Akihito.

Senior LDP politician Kato Koichi said, “The fizzling out of the bill to grant political rights to foreigners in 2010, the Abe administration’s denial of the Murayama statement [apologizing for colonial and wartime misdeeds] and the Kono Statement [apologizing for the recruitment of women into sexual slavery] all are because the Japan Conference was secretly working behind the scenes.”