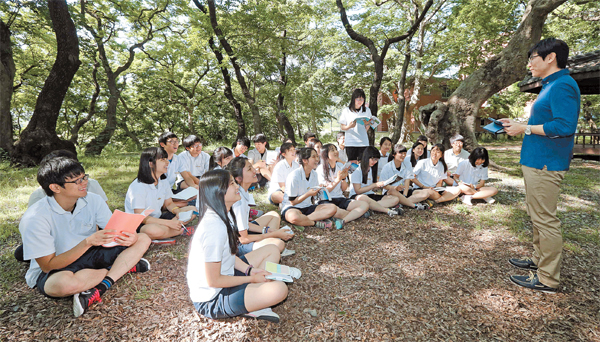 Nestled between the lush hillsides of Mount Taebaek and Juwang in Gangwon, Yeongyang County, doesn’t look like somewhere there would be a top-performing boarding school.

But the rural town, a four-and-a-half-hour drive from Seoul, is where top-ranked students from across the country make their way to study at Yeong Yang Girls’ High School.

The school’s neighborhood doesn’t have any cram school or hagwon that puts students through hours of intense studies for the all-important college entrance exam, but a number of students, many of them from upscale Gangnam District, compete to win a place at the school.

Only 62 of the school’s 224 pupils come from Yeongyang. The rest come from regions ranging from Busan and Daegu to Seoul.

Parents cite the school’s emphasis on character education and the high admission rate to top-tier universities as the appeal of the boarding institute.

“Every student I encounter at this school greets me in a polite manner,” said Yoo Geun-sub, whose daughter attends the school.

“This means that the school not only cares about academic achievements but also character-building. I think it’s a great decision to have her go to this school,” he said. 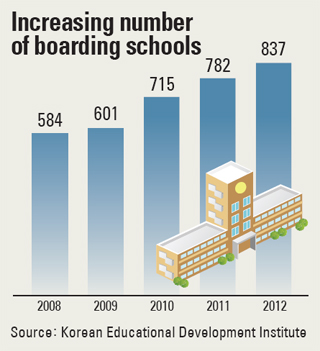 “My son goes to Hong Seong High School and it takes a one-and-a-half-hour car drive to get there from our house in Yongin, Gyeonggi,” she said.

“But I believe that it is good for him because the school has a number of respectable teachers who emphasize a decent morality as well as high scores on exams,” Geum said.

“I feel my son is getting mature and more thoughtful after getting into the boarding school. I think he develops social skills while dealing with roommates through the dorm life.”

Jang Seong High School breaks down many Koreans’ perception that elite prep schools in Seoul only promise a ticket to prestigious universities.

Located in Jangseong, a town of 14,000 in South Jeolla, the high school has no supermarket within a 500-meter radius. Yet, the school had the highest average score in four subjects of the national college entrance exam last year, with 24 out of some 200 pupils admitted into Korea’s top three universities ? Seoul National, Yonsei and Korea.

Another important factor that pulls parents and students to those remote boarding schools lies in time-saving. Students don’t have to go through the hassles of dealing with traffic and meals.

“Most students don’t attend supplementary hagwons for additional help, not because there is no hagwon around here, but because the teaching offered from the school is enough,” he said.

The students are also supposed to abide by a stricter, possibly beneficial, schedule throughout the day, keeping them from the irresistible charm of games and smartphones.

“I can’t use my cell phone at the school and we can sleep out only once a month,” said Kim Eun-mi, an 18-year-old girl who attends Yeong Yang Girls’ High School.

“Students in big cities are likely to be distracted by many things but we are less likely,” she said.

The natural endowment of a school near a remote rural village also appeals to students and their parents looking for a healthier lifestyle and positive effects of it.

The Hong Seong High School taps into its surroundings by offering experience programs including exploration of foreshore and stream environments, observation of celestial bodies and hiking.

“We have distinctive programs that are only available to our school,” said the school’s vice principal Kim Seon-wan.

“We also invite prominent figures to deliver a lecture to the students in order to help them lead a purpose-driven life,” he said.

The boom of such prominent boarding schools began in the late 2000s when the government adopted a plan to revamp high schools in remote areas. The Lee Myung-bak administration appointed 150 private and public high schools nationwide to have dormitories and accept applicants from across the country.

The government allowed those schools more autonomy to set suitable time tables and provided financial subsidies worth 200 to 300 billion won ($177.2 to 265.8 million).

Following the initiative, the number of boarding schools increased to 837 last year, up from 584 in 2008.

Hailed as a way of decentralizing the capital city and reviving rural areas, the scheme will gradually be extended to middle schools.