Baseball fans in Korea are bringing butterfly nets to stadiums, hoping to catch Lee Seung-yeop’s 352nd career home run ball. The Korea Baseball Organization said it would make its pitchers use specially marked balls against the Samsung Lions’ slugger in all his at-bats until he breaks the home run record.[NEWSIS]


Baseball fans in Korea are coming out with butterfly nets to catch Lee Seung-yeop’s next home run ball as the Samsung Lions slugger is only a homer shy of breaking a Korean record.

Lee hit his 351st homer in the Korea Baseball Organization against the NC Dinos on Saturday, tying his former teammate, Yang Joon-hyuk, for the most career home runs. A new record is in sight as early as tonight. The first game in the three-game series against the SK Wyverns at Munhak Stadium in Incheon was rained out last night.

A sea of butterfly nets in the stands of Korean ballparks was a familiar scene in September 2003 after Lee hit his 55th homer of the season, tying the all-time Asian single-season record set by Sadaharu Oh of Japan in 1964. In anticipation that his 56th home run ball would be valued at more than 100 million won ($88,400), baseball fans traveled to the stadiums where the Lions were playing to try to seize the ball. Lee hit the record-breaking homer on the final regular season game on Oct. 2, 2003, but the value of the ball was not appraised as the person who grabbed it at Daegu Baseball Stadium, the Lions’ home park, donated the ball to the Lions.

A similar fuss formed in 1999, when Lee came close to breaking the record. A local company offered to pay 100 million won to the person who seized his 56th home run ball, but Lee only hit 54 homers that season. 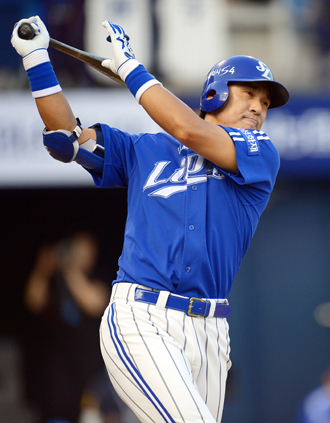 As the competition to grab Lee’s record home run ball has been rekindled, the KBO said yesterday that it would make its pitchers use specially marked balls against Lee in all of his at-bats until he hits his 352nd home run. This would prevent people from falsely claiming they seized the historic home run ball. The KBO did not reveal the nature of the special mark. Only the umpires and KBO officials would be able to identify it, the league said. The KBO also used specially marked balls when Lee hit his 56th homer in 2003.

Lee, who won five home run titles in the KBO, went to Japan after the 2003 season and hit 159 homers with three Nippon Professional Baseball teams - the Chiba Lotte Marines, the Yomiuri Giants and the Orix Buffaloes - between 2004 and 2011, giving him 510 career home runs.

The Lions will host the LG Twins for a three-game series beginning Friday.

Lee is close to setting another record. He has scored 997 runs as of yesterday, three shy of becoming the eighth player in KBO history to reach 1,000. He would become the youngest player to reach that milestone. Lee Jong-beom, the Hanwha Eagles assistant coach, scored 1,000 runs in 1,439 games. Lee also has 1,073 RBI.