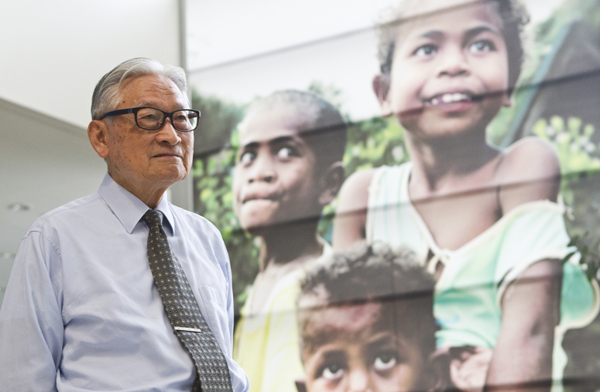 Cho Wan-kyu, a veteran educator, says that the term of the Education Minister should match that of the presidency in duration to better carry out education policies. By Cho Yong-cheol

Having been involved in drafting education policy and reviewing the results in different positions, the 85-year-old veteran educator was able to take an up-close look at the Korean education system.

The JoongAng Sunday met up with Cho to discuss his insights into the education system and how policy can improve the system often blamed for generating cutthroat competition and a lack of creativity.

Q. What did you learn during your term as education minister?

A. When one tries to implement education policy he or she should have foresight. When I took charge of the Ministry of Education during the Roh Tae-woo administration for 13 months I felt limited. It was hard to embark on a new project because I had to carry out the policy within the limits of the budget left by my predecessor. So, I didn’t feel rewarded from the position because there were few resources available for me.

You’ve said that the term of the education minister should go hand in hand with that of the president’s. What’s the reason behind the view?

The education sphere is very sensitive to the change of the government and the personnel and it should go through major, often radical changes with the shift in leadership of top posts. The key to successful education policy is consistency, but a run of short-lived education ministers will stand in the way.

Now, the Ministry of Health and Welfare is overseeing day care centers while the Ministry of Education is responsible for the matter of kindergartens. Would the separate management hamper consistency?

Yes, it does. One department should be in charge of supervising both centers. I think the Welfare Ministry should be tasked with taking care of issues related to the budget and facility management, whereas the Education Ministry should focus on the curriculum of the institutions.

How can the school help younger people spot and pursue their interests?

The school teachers should always offer curiosity-driven courses, allowing their imagination to run wild. For example, science teachers should not just explain natural phenomena plainly. They can ask students, ‘Why does the sun rise in the east? Or why do the vast majority of flowers bloom in spring, not winter? Or what’s the difference between apricot blossoms and cherry blossoms?’

They should not put their answers in the text book. Instead, they should let students think about them for a moment. If we look at textbooks in the U.S., they are designed to trigger curiosity and provoke thoughts.

You have emphasized the role of teachers. Some criticized the current teacher appointment system where only those who passed the national teacher qualification exam can become a teacher. They suggest that schools bring in talent from diverse backgrounds. What do you make of this opinion?

That’s right. We need to open more opportunities to a broader range of people. There should be some changes. An engineering major can work elsewhere other than a factory or manufacturing company. In the same way, those who graduated from the college of education don’t necessarily need to be a teacher. They can be, for example, a journalist.

There has been a criticism that the national college entrance examination places too much pressure on students. What do you think about that?

The one-day test has become an end-all, be-all for high school students. But I think it’s a little unreasonable that a single test determines the future of one person. What if a test-taker has caught a cold or just failed to manage nervousness on that day?

That’s how I suggested that a student be given one more chance a few weeks or a month after the first test if he or she feels they can do better. The final score should be the average of the two tests. We actually implemented this system during the Roh Tae-woo administration, but ended up only trying once because the exam writers complained that it’d be harsh for them because they should be shut off from all outside contact.

But U.S. high school students can take the SAT tests several times. Can’t we operate like this?

The U.S. students try over and over again to get into the university that they want. I think the system is very fair and objective. We should follow their way of administering tests. It would reduce costs as well, because we can develop an item pool. The students should be given chances at least two or three times a year. If I could be in the position of the education minister for one more year, I could’ve carried out this America-inspired way.

Korean universities accept a bunch of super-smart students whose ability to understand math and science is above the world’s average. But why are there no internationally renowned colleges in Korea?

U.S. universities vigorously compete under the deregulated environment. So, they keep evolving into a better institution through healthy competition. As the quality of courses improved, there are a lot of alumni and other people who are willing to donate their money. Then, the university can secure more resources to further develop the schools. This is a virtuous cycle. But in Korea, a number of regulations and rules hamper such cycle from taking place. This is unfortunate.

As an education veteran, what kind of advice is necessary to the current Korean college students?

Back in the 1980s, college students were busy staging demonstrations. They didn’t have sufficient time to study as their eyes were filled with passion and I could feel their determination to turn this country into a better one. The president of Tokyo University once told me their students are so apathetic. But, now, they are preoccupied by the thoughts of landing a good job. Job-seeking is important but younger people should have critical thinking skills and be committed to making forward progress.