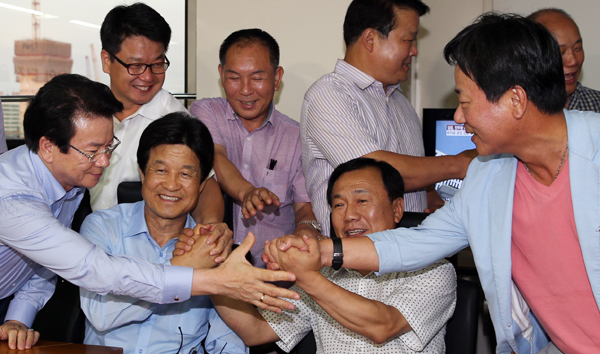 South Korean businessmen with factories in the Kaesong Industrial Complex are delighted yesterday in their office in Yeouido, Seoul, after hearing the news that the two Koreas agreed to reopen the joint inter-Korean economic project. [NEWS1]

After six acrimonious rounds of low-level talks, negotiators from the two Koreas adopted an agreement at around 7 p.m., signed by each chief negotiator: Kim Ki-woong from the South and Pak Chol-su from the North.

A schedule for the reopening was not announced.

In the five-clause, two-page agreement, both Koreas agreed to the following terms: To not disrupt operations of the complex by restricting access to it or withdrawing workers unilaterally; to guarantee the safety of the workers and protect the assets of companies investing in the complex; to resolve all suspended telecommunications and custom services; to guarantee to maintain conditions in the complex and develop the park further by attracting investments from other countries or improving related policies; and to launch a South-North joint committee for the Kaesong Industrial Complex to implement these terms.

“President Park Geun-hye said that North and South Korea will revamp relations in the wake of the agreement and will develop the industrial park into an international investment destination,” said presidential spokesman Lee Jung-hyun.

The most controversial issue was which side would pledge not to shut down the complex in the future. North Korea maintained that both sides had to make such a guarantee, while the South said the onus was solely on the North. Therefore, the subject of that clause became a point of contention.

To resolve it, all clauses in the agreement started with the subject, “The South and the North will .?.?.?”

Basically, South Korea backed down to the North’s demand and both guaranteed not to shut the complex down in the future.

“It doesn’t mean we yielded everything to North Korea,” a Unification Ministry official told the Korea JoongAng Daily yesterday. “It is true that we changed our previous position. But although the subject is both South and North, it is actually North Korea that can order an entry ban or pull its workers out of the complex, not the South.”

Asked why the South changed its position, Kim said, “This is a negotiation. We don’t have to stick to every single word.”

In morning sessions yesterday, Southern negotiators presented a revised version of the agreement, according to the Unification Ministry.

“Focusing on a guarantee for preventing further disruptions, our side explained plans to internationalize the complex,” Park Soo-jin, deputy spokeswoman of the ministry, told the Joint Press Corps in Kaesong after the morning sessions. “The Northern side explained its position based on their special statement released on Aug. 7 by the Committee for the Peaceful Reunification of Korea.”

Pyongyang proposed the seventh round of talks in the Aug. 7 statement and reiterated its previous positions on Kaesong. The atmosphere at the negotiating table was fairly good from the beginning, according to the Joint Press Corps, when the two chief negotiators exchanged opening remarks. The press was present.

“Mr. Kim [Ki-woong] and I are both trying to grow something in the industrial park and the weather is good,” Pak told Kim. “I think we could have a fairly good harvest.”

The impasse began on March 27, when North Korea abruptly cut off the military hotlines with the South that were used for communication regarding the entry of South Korean workers to the complex.

On April 8, Kim Yang-gon, North Korea’s top decision-maker for Kaesong, announced a pullout of the 53,000 Northern workers in the complex.

On May 3, all of the Southern business owners and workers returned from the complex, leaving it a ghost town. On June 6, the two Koreas started the first of seven rounds of talks.

A North Korean official told the South’s Joint Press Corps yesterday that if Kaesong was resolved, talks could begin on family reunions and reopening the closed Mount Kumgang Resort.