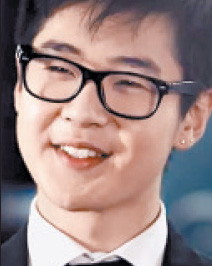 Kim Han-sol, grandson of the late North Korean leader Kim Jong-il, has been admitted to the prestigious Paris Institute of Political Studies and will start at the school next month.

The great-grandson of the North Korean founder Kim Il Sung came into the spotlight after giving an interview to a Finnish politician, Elisabeth Rehn, a former United Nations Under-Secretary General, for a Finnish program last October.

Wearing a suit, black glasses and stylish hair, Kim said in fluent English that he one day “would go back and make things better and make it easier for the people there [in North Korea].”

Kim also said he had some South Korean friends whom he felt awkward around at the start, but they started to understand each other “little by little.”

‘’Through meeting people, I’ve concluded that I will just take opinions from both sides, see what’s good and what’s bad, and make my own decisions,” he said with remarkable poise.

His father, Kim Jong-nam, is believed to be living in Macau and China. Kim Jong-nam’s political fortunes started dimming in North Korea after he was caught trying to sneak into Tokyo with a fake passport to visit Disneyland in 2001.

After the Finnish television interview, Kim has been out of the public eye until reports yesterday said he had been admitted to the institute in Paris.

Kim graduated from United World College in Mostar, Bosnia, in May, finishing less than two years there. He reportedly enrolled at the school in October 2011.

The Paris Institute of Political Studies has a strong curriculum in political science and has produced well-known political and diplomatic figures, including the French President Francois Hollande.

Kim will reportedly study on a campus in Le Havre in northwestern France.