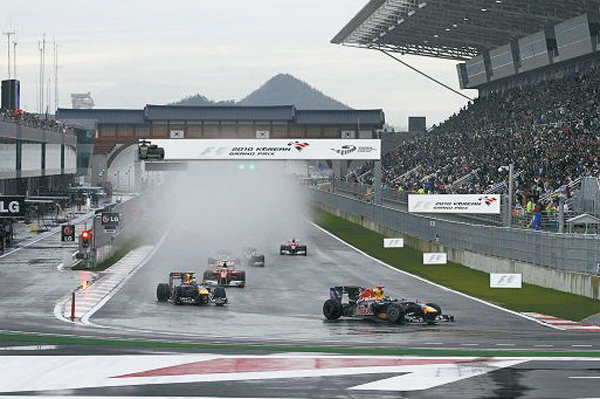 The Korea Grand Prix, a Formula One race, took place at Yeongam, south Jeolla, in October. Provided by the organizing committee of the Korean Grand Prix

There will be no more Formula One races in Korea. The Formula One Grand Prix in Yeongam, South Jeolla, has been excluded from the revised event calendar in the general meeting of the World Motor Sport Council that was held in Paris on Wednesday. Events in New Jersey and Mexico were also eliminated, while events in Austria and Russia were added.

The new Austrian Grand Prix will be on June 22, bringing teams back to Europe after the race in Montreal. The Russian GP in Sochi will be on Oct. 12, a stopover for teams from the Japanese GP to the United States GP. They replace the Indian GP and South Korean GP. Yeongam was included in F1’s initial calendar that was released on Sept. 30 but was excluded this time. The change isn’t a surprise, given that Korea has had a 191 billion won ($179 million) deficit since it started holding the GP event in 2010. As it had a hard time making a profit, running the event in a small city in South Jeolla has been controversial, forcing the South Jeolla Provincial Assembly to put off a plan of supporting about 7 billion won that the Korea GP organizing committee needs to pay for a license fee for next year’s event.

There were also political problems. When the initial calendar was unveiled in September, the Korea GP, which had its 2013 event in October, was assigned to have it in April.

Analysts, politicians and even fans were opposed to the April date, because it would put too much financial pressure on the members of the new organizing committee, who will be elected in June. The south Jeolla governor also serves as the chief of the organizing committee. Others raised safety concerns about the Yeongam track if there is another race there only six months after the last one.

There were rumors that South Jeolla governor Park Joon-young might have asked F1 to give the April event to Yeongam because he wanted to attract more votes by holding an international-level event, but Park denied the rumor, saying the decision was made solely by F1.

The Korea GP organizing committee succeeded in lowering the license fee through negotiations and appealed to the provincial council to reduce the deficit to under 15 billion won per event, but October’s Korea GP generated 18 billion won, which made it a target of criticism in local inspections conducted in November and December. The central government also decided not to give any financial support to the Korea GP.

The Korea GP had paid 167.2 billion won to Formula One Management (FOM) to host the event the last four years, but it requested the FOM to lower the fee to $20 million, which is about 45 percent of its original cost of $43.7 million. The FOM rejected the request, saying giving such huge discount only to Korea is unfair.

The Korea GP organizing committee said it will renegotiate with the FOM to put the event back on the track in 2015, but motorsports analysts are skeptical. “No matter how long Yeongam has been hosting the event, they have to start everything again, including negotiating fees they have to pay to the FOM,” one analyst said. “I seriously doubt the diplomatic capability of the Yeongam organizing committee.”

The Korea GP could become a big political issue in next year’s local elections. Analysts and local businesses related to motorsports fear the decision could badly impact the motor racing business. The South Jeolla government has been conducting several projects, including manufacturing high-quality racing car components and developing car-tuning businesses in the region.

Also, some of the 42 workers on the organizing committee fear they will lose their jobs. Governor Park recently said some jobs might be relocated. Local restaurants, hotels and other businesses that used to have international customers may also suffer. The event appears to need a sponsor from among the country’s major conglomerate, such as Samsung or LG groups, but the only remaining sponsor, LG Electronics, recently decided not to extend its sponsorship.