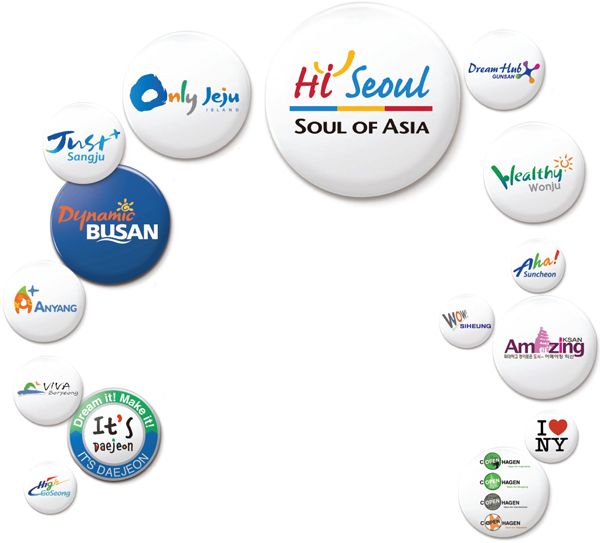 Slogans often determine the first impression of a city or a country. For example, “I NY,” New York’s catchy, well-made slogan, attracted tourists and a large sum of money to the city.

But “Konglish” slogans, or slogans of English words adapted into Korean vocabulary, used by the local Korean governments seem to attract only contempt.

On a website run by a woman from Oregon, there is a post titled “Korean city slogans.” It is a sarcastic introduction of local slogans she observed while living and traveling in Korea. The post includes “Hi Seoul,” “Aha! Suncheon,” “Viva Boryeong” and “Just Sangju.”

These official slogans, which were created using millions of won in taxes, are a problem.

“Konglish used by Korean public institutions and local governments has been a joke for a long time to foreigners in Korea,” said Michael Breen, chairman of the PR company Insight Communications Consultants. “The real problem is that they don’t even realize they are wasting money on wrong publications.”

For example, the Spanish word “viva” from “Viva Boryeong” means “live.” But according to the Boryeong city website, V stands for “Vacation Land,” I for “Impress City”, V for “Variety City” and A for “Adventure City.”

Aside from the grammatical errors, it is difficult to correlate between the word “viva” and Boryeong. Konglish slogans are often awkward English expressions that overlap with a lack of understanding in branding.

Slogans are usually chosen by a few employees or hired experts who make their decisions based on their bosses’ facial expressions. This results in awkward slogans, even though they are mostly short and under five words.

“Americans usually take part in the process in large cities like Seoul or Busan, but they wouldn’t touch the slogans decided by Koreans,” said Choi Yong-sik, the author of “What’s Wrong with Korea’s Global Marketing?” The book points out problems with Konglish.

“By just standing by, they can renew their contracts and when a problem occurs, they can say that they didn’t make them,” Choi said.

Choi said that “Hi Seoul,” the slogan of Seoul in which the city says hi to itself, is one of the failures.

Breen agreed that “Hi Seoul” is a meaningless phrase that reminds him of “Yes! Tokyo.” Currently, Seoul uses “Hi Seoul” and “Soul of Asia” as its official slogans. Breen added that the “Soul” slogan might offend other Asians by claiming Seoul as the soul of Asia.

On the other hand, Margaret Key, the Korea market leader of the global public relations company Burson-Marsteller, supported the slogan because it is easy to pronounce and has dual meanings.

“‘Hi Seoul’ was created in 2006 by an expert company,” said a Seoul city official. “It means that Seoul embraces all of Asia. There is no plan for a change because long-term management is important for a slogan once it has been settled on as a brand.”

The Korean local governments have produced English slogans competitively without understanding their essence. “Every local government created one, thinking they should have one too because everybody else does,” said an anonymous PR expert. This attitude resulted in slogans that are either copycats or awkward.

Iksan’s “Amazing Iksan” evokes “Amazing Thailand.” But a PR expert demurred, saying there is no problem with “Wow! Philippines” even though “Wow! Siheung” exists.

Breen suggests that the problem lies in the irrelevant meaning, which doesn’t seem relevant to Siheung’s identity. He also pointed out that “Just Sangju” also seems like Nike’s “Just Do It.” It means that slogans should reveal the identity of the local government or institution.

“It was invented in 2005, acoustically suggesting a vision of Suncheon to become one of the central cities in northeast Asia,” explained a Suncheon official. Yet, the public opinion is that there is no correlation between “Aha!” and “Suncheon.”

“A considerable number of slogans of Korean local governments do not reflect the unique qualities of their cities at all,” said Breen. “It is like North Korea is publicizing Pyongyang as an investors’ paradise, which will lead foreigners to burst out laughing.”

One PR expert claimed that grammatical errors must be viewed as creativity. But Choi disagreed. He said there is a big difference between grammatical errors that are made on purpose and making mistakes without understanding grammar.

Recently, some local governments that have become aware of the problem are changing their slogans. Siheung stopped using “Wow! Siheung” in 2011. Boryeong is also in the process of changing its slogan from “Viva Boryeong” to “Mansae [hooray in Korean] Boryeong.”

“Central identity should be considered with native English speakers,” said Choi Jung-hwa, president of the Corea Image Communication Institute. “It is important to make a slogan easy to pronounce and remember.”

“The biggest problem is the absence of meaning,” said Breen. “I suggest slogans like ‘We Love Mud’ or ‘Join Us in the Mud’ instead of ‘Viva Boryeong,’ for I’m a huge fan of the mud festival. It might sound strange in Korean but in English, it rhymes and is good to hear.”

Choi and Breen agree on the solution to the problem. “After decided on a slogan, it needs to be tested by foreigners,” said Choi, highlighting a consistent effort.