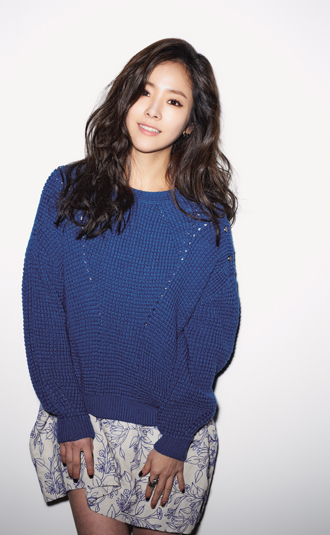 Actress Han Ji-min, long known for playing pretty, innocent roles, changed her image for the movie “The Plan Man,” which opened in Korea on Jan. 9.

Han took on the part of a loud and unpredictable musician named So-jeong, someone fanciful and bold enough to help shake up a man burdened by terrible obsessive-compulsive disorder (played by Jung Jae-young).

The actress recently sat down for an interview with Ilgan Sports, an affiliate of the Korea JoongAng Daily, where she talked about her real personality, New Year’s resolutions and kissing her famous co-star.

Q. Is So-jeong a good reflection of your true style?

A. Maybe not too much, but I generally have been a very cheerful person. I went to class late in college, making noise with friends and eating snacks while sitting in the back of the classroom during lectures. But I was more disciplined and strategic in high school. No one forced me, but I never missed a nighttime study session. I was one of the only 10 people who would still come to school during vacation when extra classes were offered.

I’m a very curious person, so I have to try new foods when I see them. However, I could never try bosintang [a soup made with dog meat], even though I’m very curious about how it tastes.

How did you prepare for your singing audition scenes?

Singer Muzie of [the group] UV gave me some tips on how to sing. I learned more about how to express myself when I sang than technical tips. I also learned how to play guitar and ukulele.

In real life, I enjoy watching audition programs, like SBS’s “K-Pop Star.” I do like the fact that contestants are good at singing, but I also envy the passion they have. After I played So-jeong, an indie musician, I started to pay more attention to those contestants.

What was it like to work with actor Jung Jae-young?

He is already very well known for his acting. I have been a fan even before we started filming the movie together, and I think I’ve watched all his works, including his most recent film “11 A.M.”

As most people know, it is extremely important to have good chemistry when doing a romantic comedy. I think he made the filming go smoothly.

How did you like kissing him in the movie?

It was my first kiss scene for a movie. In TV dramas, you barely get to feel the tension of doing a kissing scene because the filming proceeds so fast. However, the process [for movies] is comparably slower so the feeling lasts longer. It is not because it was Jung but because it was done in a different setting.

What is your New Year’s resolution?

In fact, things never go as planned for actors and actresses. As I get one year older, I think I should not harass myself with unnecessary worries. I am trying to move on from the past. This year, I plan on taking better care of myself mentally, rather than focusing on working out or eating healthily.